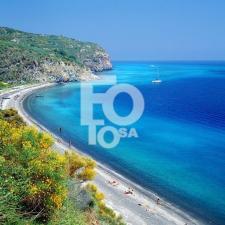 Lipari Islands (lĬp´ərē), formerly Aeolian Islands (ēō´lēən), Ital. Isole Eolie, volcanic island group (1991 pop. 10,382), 44 sq mi (114 sq km), Messina prov., NE Sicily, Italy, in the Tyrrhenian Sea. The group includes Lipari (14.5 sq mi/37.6 sq km), an exporter of pumice and the site of Lipari, the group's main town; Salina, where malmsey wine and currants are produced; Vulcano, the site in former times of the worship of the mythical fire god, with a high volcano that emits hot sulfurous vapors; Stromboli, the northeasternmost, with an active volcano (3,040 ft/927 m) that has several craters and has been in nearly continous eruption for a millenium—noted for relatively mild explosive eruptions that are spectacularly incandescent during the night; Panarea; Filicudi; Alicudi; and 11 other islands. Fishing is an important occupation, and there is a growing tourist industry. Regarded as the site of the mythical residence of Aeolus, the wind god, for whom they were formerly named, the islands were colonized by the Greeks in the 6th cent. BC Under the Roman Empire and during the Fascist regime in Italy (20th cent.) the island group served as a place of exile for political prisoners.