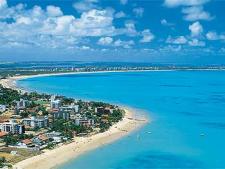 Paraíba (pərīē´bə), state (1991 pop. 3,201,114), 21,765 sq mi (56,371 sq km), NE Brazil, on the Atlantic Ocean. The capital is João Pessoa. The state extends inland from the Atlantic to the semiarid plateau of the interior (the sertão). The economy is largely agricultural; although cattle-breeding remains the principal activity, more and more pastures have been given over to cultivation, with cotton and sugarcane as the chief crops. The state produces textiles, salt, food products, and metals (chiefly tin and scheelite). Fishing and the production of vegetable oil and cement are increasingly important. Prior to the arrival of the Portuguese in the late 16th cent., the region was densely settled by numerous Native Americans. The area's colonization took more than 70 years to complete because of Native American hostility. By the early 17th cent. Paraíba was an important and prosperous captaincy, but this prosperity was interrupted by the Dutch occupation (1634–54), more uprisings by Native Americans, and an epidemic of yellow fever in 1686. The first nationalist uprising in the area occurred in 1710. Throughout the 19th cent. economic development was impeded by continual outbreaks of violence and by the abolition of slavery. Not until the 1930s was some economic stability achieved. Frequent droughts have led to great migrations from the countryside to the cities. The state government consists of an elected governor and bicameral legislature. The Universidade Federal da Paraíba has campuses throughout the state.

Paraíba or Paraíba do Sul (dŏŏ sōōl), river, c.650 mi (1,050 km) long, rising as the Paraitinga in the Serra do Mar, São Paulo state, SE Brazil. It flows southwesterly to a point NE of São Paulo city where it makes a hairpin turn and continues in a northeasterly direction through the state of Rio de Janeiro to the Atlantic Ocean near Campos. Below Três Rios it flows through a gorge on the Rio de Janeiro–Minas Gerais border. Its beautiful valley forms a rich agricultural region (site of Brazil's first commercial coffee plantation) as well as a major industrial center of Brazil. The river is used for irrigation, transport, and power generation.