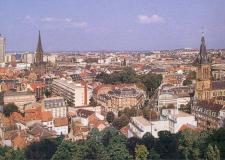 MULHOUSE (Muelhausen), city in *Alsace, in the Haut-Rhin department, France. The earliest documentation of the presence of Jews in Mulhouse dates from 1290, when one Salman was victim of a persecution. The existence of a synagogue is confirmed from 1311. The Jews of Mulhouse suffered during the *Armleder riots in January 1338, and again during the outbreaks accompanying the Black *Death (1349). By 1385, however, there were once more Jews living in Mulhouse. At the beginning of the 15th century, several Jews who had arrived from other places in Alsace were granted the freedom of the city. The nine families who were there in 1418 owned houses, engaged in moneylending and traded in livestock. Although there was no expulsion, no Jews lived in the city between 1512 and 1655. At the beginning of the 18th century, when they were still insignificant in number, their trade flourished to the extent of arousing the jealousy of the Christian merchants, who demanded that their rights be restricted. In 1784 there were 23 Jewish families (94 persons) in the city. As it was free from the anti-Jewish riots which broke out throughout Alsace in 1789, Mulhouse became a refuge for many Jews from the surrounding district. The synagogue, built in 1822, soon proved to be too small and was replaced by a larger one in 1849. A cemetery was purchased in 1831, and the community established several other institutions, including a vocational school in 1842, and an almshouse-hospital in 1863. Two periodicals catering for all the Jews of Alsace and even beyond were published during the second half of the 19th century. From about 5,000 in 1900 the community declined to around 3,000 in 1921, remaining stable until just before World War ii. Jacob *Kaplan, later chief rabbi of France, held office in Mulhouse in 1922.

Under German occupation in World War ii, the Jews who had not managed to escape were expelled on July 16, 1940, along with the Jews in the rest of Alsace and Moselle. The synagogue, which had been partially damaged, was saved from total destruction when the edifice was requisitioned by the municipal theater. In 1970 Mulhouse had 1,800 Jewish inhabitants and a well-organized and active Jewish community.

Turin , TURIN TURIN (It. Torino ), city on the Po River, N.W. Italy. Turin was the capital of the duchy of Savoy and later of the kingdom of Sardinia; it is… Bas-rhin , Alsace ALSACE , former province of the Germanic (Holy Roman) Empire, and from 1648, of *France, including the present department of Haut-Rhin and Bas… Salzburg , SALZBURG , city and province in W. Austria, formerly archbishopric and duchy. The first mention of Jews in the archbishopric occurred as early as 803… Rouen , Rouen ROUEN , former capital of Normandy, capital of the department of Seine-Maritime, northern France. The presence of Jews in Rouen goes back to at… Innsbruck , INNSBRUCK , capital of the Tyrol, W. Austria. In the 13thcentury a Jew is mentioned as mintmaster to the duke of Tyrol. Subsequently, Jewish traders… Moravia , MORAVIA (Czech Morava , Ger. Maehren , Heb. ,ןרהרמןיררעמ), historic region of the Czech Republic (formerly in *Czechoslovakia). A political unit from…