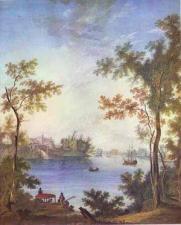 One of the great imperial country palaces to the south of St. Petersburg, Gatchina was located near the site of a village known since 1499 as Khotchino. In 1708 Peter I granted the land to his beloved sister Natalia Alexeyevna, after whose death in 1717 the property belonged to a series of favored court servitors. In 1765 Catherine II purchased the estate from the family of Prince Alexander Kurakin and presented it to Grigory Orlov. She commissioned the Italian architect Antonio Rinaldi to design for Orlov a lavish palace-castle in a severe and monumental neoclassical style. Rinaldi, who had worked with the Neapolitan court architect Luigi Vanvitelli, created not only a grandiose palace ensemble but also a refined park.

The palace, begun in 1766 but not completed until 1781, was conceived as a three-story block with square, one-story service wings—designated the Kitchen and Stables—attached to either side of the main structure by curved colonnades. In order to project the appearance of a fortified castle, Rinaldi departed from the usual practice of stuccoed brick and surfaced the building in a type of limestone found along the banks of the nearby Pudost River. The flanking towers of the main palace and its restrained architectural detail further convey the appearance of a forbidding structure. On the interior, however, the palace contained a display of luxurious furnishings and decorative details, including lavish plaster work and superb parquetry designed by Rinaldi. Rinaldi also contributed to the development of the Gatchina park with an obelisk celebrating the victory of the Russian fleet at Chesme. The exact date of the obelisk is unknown, but presumably it was commissioned by Orlov no later than the mid-1770s in honor of his brother Alexei Orlov, general commander of the Russian forces at Chesme.

Following the death of Orlov in 1783, Catherine bought the estate and presented it to her son and heir to the throne, Paul. He in turn commissioned another Italian architect, Vincenzo Brenna, to expand the flanking wings of the palace. Brenna, with the participation of the brilliant young Russian architect Adrian Zakharov, added another floor to the service wings and enclosed the second level of a colonnade that connected them to the main palace. Unfortunately, these changes lessened the magisterial Roman quality of the main palace structure. Brenna also modified and redecorated a number of the main rooms, although he continued the stylistic patterns created by Rinaldi.

Grand Duke Paul was particularly fond of the Gatchina estate, whose castle allowed him to indulge his zeal for a military order based, so he thought, on Prussian traditions. The palace became notorious for military drills on the parade grounds in front of its grand facade. With the accession of Paul to the throne after the death of Catherine (November 1796), the Gatchina regime extended throughout much of Russia, with tragic results not only for the emperor's victims but also for Paul himself. After his assassination, in 1801, the palace reverted to the crown.

Among the many pavilions of the Gatchina park, the most distinctive is the Priory, the product of another of emperor Paul's fantasies. After their expulsion from the island of Malta, Paul extended to the Maltese Order protection and refuge, including the design of a small pseudo-medieval palace known as the Priory, intended for the prior of this monastic military order. In his construction of the Priory, the architect Nikolai Lvov made innovative use of pressed earth panels, a technique that Paul had observed during a trip to France. The relatively isolated location of the Priory made it a place of refuge in 1881–1883 for the new emperor, Alexander III, concerned about security in the wake of his father's assassination.

For most of the nineteenth century the palace drifted into obscurity, although it was renovated from 1845 to 1852 by Roman Kuzmin. After the building of a railway through Gatchina in 1853, the town, like nearby Pavlovsk, witnessed the development of dacha communities. Gatchina briefly returned to prominence following the Bolshevik coup on November 7, 1917. The deposed head of the Provisional Government, Alexander Kerensky, attempted to stage a return from Gatchina, but by November 14 these efforts had been thwarted. In the fall of 1919 the army of General Nikolai Yudenich also occupied Gatchina for a few weeks before the collapse of his offensive on Petrograd.

After the Civil War, the palace was nationalized as a museum, and in 1923 the town's name was changed to Trotsk. Following Trotsky's fall from power, the name was changed again, in 1929, to Krasnogvardeysk. With the liberation of the town from German occupation in January 1944, the imperial name was restored. Notwithstanding the efforts of museum workers to evacuate artistic treasures, the palace ensemble and park suffered catastrophic damage between September 1941 and 1944. Major restoration work did not begin until the 1970s, and in 1985 the first rooms of the palace museum were reopened.