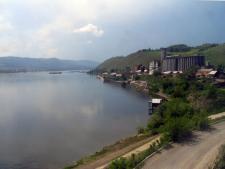 oxford
views updated
Yenisei (Yenesey) River in central Siberia, Russia. Formed by the confluence of the Bolshoi Yenisei and the Maly Yenisei at Kyzyl, it flows for 4090km (2540mi) w then n through the Sayan Mountains and across Siberia, forming the w border of the central Siberian plateau, emptying into the Yenisei Gulf on the Kara Sea. A large hydroelectric station has been built at Krasnoyarsk. The Yenisei is a source of sturgeon and salmon. A shipping route, some of its sections are frozen in winter. When combined with the Angara (its major tributary), the Yenisei is the world's fifth-longest river, at 5550km (3445mi).