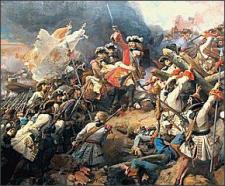 oxford
views updated
Denain, battle of, 1712. Marshal Villars, leading a French army of 24,000 troops, many of them heavy infantry, surprised an Anglo-Dutch force of about 10,000 men under the earl of Albemarle close to Denain on 24 July. Allied reinforcements under Prince Eugene tried to come to Albemarle's assistance but could not cross the Scheldt river. Pressed by superior numbers, less than 4,000 of Albemarle's men escaped; five allied generals were captured or killed and over 4,000 soldiers taken prisoner. The French suffered about 2,000 casualties.

Battle Of Malplaquet , battle of Malplaquet Malplaquet, battle of Malplaquet, battle of, 1709. As allied (British–imperialist) forces under the duke of Marlborough and Prin… Battle Of The Bulge , On December 16, 1944, the German army mounted a surprise attack on Allied forces in World War II (1939–45). Now known as the Battle of the Bulge, it… Austerlitz , The Battle of Austerlitz was fought on 2 December 1805 between the armies of France, Austria, and Russia, commanded in person by Napoleon, Francis II… Vicomte De Turenne , Henri de la Tour d'Auvergne Turenne was one of the most celebrated war heroes of French history in its pre-Napoleonic era. Of noble birth, Turenne re… Battle Of Ramillies , Ramillies, battle of, 1706. Marlborough's second major victory in the War of the Spanish Succession, in the Spanish Netherlands (modern Belgium) nort… Battle Of Blenheim , Blenheim, battle of Blenheim, battle of, 1704. In early 1704 the French and Bavarians in the War of the Spanish Succession were threatening the imper…