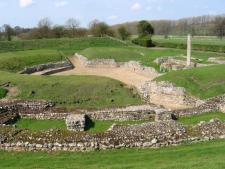 oxford
views updated
Verulamium. Romano-British town, capital of the Catuvellauni, predecessor of St Albans (Herts.). In the late Iron Age Verulamium was a major oppidum. The Catuvellauni seem to have been pro-Roman and after only brief military presence the new Verulamium started to develop. By the time of its destruction by Boudicca in ad 60 it had a small street-grid and Roman-style buildings. By 79 it was able to dedicate its elaborate new forum and in due course acquired public baths, a theatre and temple complex, a macellum (covered market), and monumental arches, and may have been promoted a municipium. In the mid-2nd cent. an expansive circuit of earthwork defences with impressive stone gates was unfinished, possibly because of a disastrous fire in the town in the 150s. In the 3rd cent. the defences were completed in stone on a slightly reduced line. In the 1st and 2nd cents. private housing at Verulamium was principally artisan. From the later 2nd cent. large residences were built, dominating the town in the 4th cent. some lasting into the 5th. Verulamium was the site of the martyrdom of Alban. Bishop Germanus of Auxerre visited his shrine in 429, and the present cathedral may perpetuate its site.