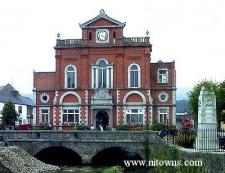 Newry, town (1991 pop. 19,246), Newry and Mourne dist., SE Northern Ireland, on the Clanrye River and the Newry Canal. It has canal connections with Carlingford Lough, the Bann River, and Lough Neagh. Newry is a seaport with linen mills, tobacco and food processing, and varied manufactures. In the 12th cent., Maurice McLoughlin, king of Ireland, founded an abbey on the site, around which the town grew. The abbey became a collegiate church of secular priests in 1543 but was later dissolved. The town's castle was taken by Edward Bruce in 1315; the duke of Berwick burned part of Newry in his retreat before the forces of the duke of Schomberg in 1689. Newry is the seat of the Roman Catholic bishop of Dromore and contains St. Patrick's parish church (1578), the first Protestant church built in Ireland.