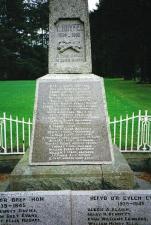 oxford
views updated
Merionethshire (Meirionydd). County of north Wales deriving its name from Meirion, one of the sons of Cunedda, who supposedly moved from Strathclyde in late post-Roman times with his people, the Votadini, in order to offset the threat of Irish invasion. It was probably an early kingdom but became part of the kingdom of Gwynedd. The annexation of the lands of the last Llywelyn by the crown under Edward I led to the creation of the shire in 1284. The coastal commote of Ardudwy to the north, and of Penllyn and Edeyrnion in the interior, taken by Llywelyn Fawr from Powys, were added. At the Act of Union in 1536 the lordship of Mawddwy was added to the county.

The county is predominantly heavily glaciated mountains and uplands with a coast of cliffs and bays. Cadair Idris is its highest point (2,927 feet) and it also includes the Aran and Rhiniog mountains, as well as the Harlech dome. Bala Lake or Llyn Tegid is the largest natural lake in Wales. Much of the county is within the Snowdonia National Park.

The vulcanism, which forms much of the highland, fancifully known as ‘the Ordovician ring of fire’, produced metamorphosed rocks, and slate has been widely quarried, at Blaenau Ffestiniog to the north and Corris to the south. Sheep-farming and tourism are the main supports of the economy. But there is a Magnox nuclear power station at Trawsfynydd, now decommissioned. The drowning of Tryweryn 1957–63 to form Llyn Celyn to supply water for Liverpool led to massive protest. Merionethshire has 65.4 per cent of its population able to speak Welsh. Merioneth was once again linked to Gwynedd in 1974 when it became part of that new county, and with Caernarfonshire constituted a reformed Gwynedd in 1996. In 1991 the total population was 31,963.

Breconshire , Breconshire. Border county of south Wales taking its name from the Welsh kingdom of Brycheiniog which can be identified from the 8th cent. Its Norman… Dyfed , Dyfed Dyfed. County of south-west Wales, extant between 1974 and 1996. The name given to the new county under the Local Government Act of 1972 was de… County Government , COUNTY GOVERNMENT. County governments in the United States function as local administrative arms within the states. In the early 2000s the National A… Wiltshire , Wiltshire is one of the larger counties, more than 50 miles from north to south. It is not easy to perceive much geographical coherence and the balan… Buckinghamshire , Buckinghamshire has little geographical unity and seems to be an entirely artificial creation. The chalk hills of the Chilterns run across the middle… Northumberland , Northumberland is a large county of ancient origins as an independent kingdom and one of the earliest centres of British Christianity. A great border…