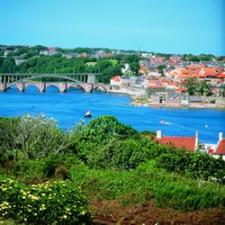 oxford
views updated
Berwick-on-Tweed. Northumbrian coastal town at the mouth of the river Tweed. Berwick was a disputed Anglo-Scottish border town and changed hands thirteen times before finally being recognized as English in 1482. The Elizabethan fortifications, built in 1558, followed the latest Italian system, designed to give fire cover to every part of the wall, and are the only surviving walls of their kind. The castle was an important border fortress but declined after the 1707 Union. It was eventually demolished to make way for a railway station, the platform of which runs over the great hall where Edward I made his famous decision to support John Balliol for the Scottish crown in 1291. The barracks, built in 1719 following complaints by townsfolk against billeting and probably designed by Vanbrugh, were among the first to be built in Britain. Berwick has three very different bridges. The 17th-cent. Old Bridge is an elegant structure which took a quarter of a century to build. The Royal Border Bridge, an impressive railway viaduct, was designed by Robert Stephenson and built 1847–50. It has 28 arches and stands 126 feet above the water. The Royal Tweed Bridge, of concrete construction, was built in 1928 to carry the main road north.