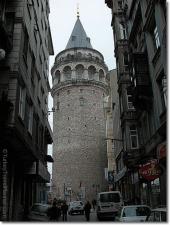 District of Istanbul on the north bank of the Golden Horn.

A Genoese settlement in the Byzantine era, Galata was officially incorporated into the city of Constantinople (now Istanbul) only in 1840. It continued through the nineteenth century to be the section of Constantinople where Europeans resided. Long the center of international trade and banking in the capital, the district's population and business activity boomed beginning in the Crimean War (1853–1856). Galata and its neighboring district Beyoǧlu (formerly Pera) became the modernized center of the city, with many theaters and hotels and the city's first tramway and telephone lines. The famous Galatasaray Lycée, established in 1868, was actually located in Beyoğlu.