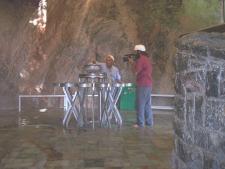 Ancient Iranian city located in an oasis in the central desert region.

Yazd is the name of a province and its capital city in central Iran. The province, which extends over an area of 27,027 square miles (70,000 sq km), is largely desert, with the great salt desert known as the Kavir in the north merging into the great sand and stone desert (the Lut) of southeastern Iran. The province has lead and zinc deposits, many of which are sites of major commercial mining operations.

The city of Yazd was an important Zoroastrian religious center during the Sassanian dynasty (226–642 c.e.) and has remained a stronghold of Zoroastrianism up to the present, although adherents of this faith comprise less than 10 percent of the city's population. In the early 2000s, about one-half of all Zoroastrians in Iran lived in Yazd, and the fire temples there and in some surrounding villages had become historic pilgrimage sites. Between the thirteenth and nineteenth centuries, the city was internationally renowned for its silk, cotton, and woolen textiles, but these handicrafts declined dramatically after 1850 as the volume of European manufactured textiles imported into Iran increased. By the mid-twentieth century, entrepreneurs had established modern cotton and woolen textile mills in the city, and Yazd gradually recovered its status as a regional commercial and production center. The railroad from Tehran to the Gulf of Oman port of Bandare Abbas, completed in 1995, passes through Yazd; its construction helped stimulate development in and migration to the city. Between 1976 and 1996, the population of Yazd increased more than 140 percent (an average of 7 percent per annum), from 135,925 to 326,776.