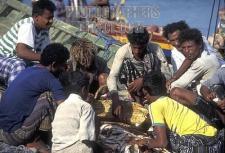 The major Red Sea port of Yemen since about 1849.

In 1849, the Ottoman Empire, during its second occupation of Yemen, selected Hodeida (also Hudayda) as its major base and point of entry from the Red Sea. In fact, Hodeida is not a natural deep-water port, and years of ballast dumping have made it incapable of accepting anything but small local ships. The major port activity now takes place at Raʾs Khatib, a short distance north of Hodeida; this is a modern facility with wharves, unloading equipment, warehouses, and a transportation infrastructure that can accommodate modern freighters.

Raʾs Khatib was constructed by the Soviet Union as part of its foreign aid program during the 1960s. It remained the key access point to Yemen until 1990, when the Yemen Arab Republic merged with the People's Democratic Republic of Yemen. Then, Aden, one of the world's best natural harbors, became the primary port and economic capital of the new republic.