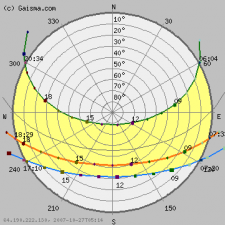 Tunisian seaport on the northeast coast of the Gulf of Gabès.

Sfax (also Sfaqes or Safaqis) was a Phoenician trading center before it was settled in the eighth century by Arab invaders spreading Islam; they built a mosque in the mid-ninth century. It continued as an important seaport for the Mediterranean olive oil trade and was one of the few Tunisian towns to resist the French occupation after the protectorate of 1881, thus suffering bombardment. After Tunisia became independent in 1956, Sfax became the center of a governorate and the second-largest Tunisian city, with a population of some 232,000 (as of 1984).

Today it has a medical school, one of three appellate courts, a large prison, the regional radio station, an international airport and an air-force base, and a busy port that handles mainly phosphates and olive oil.