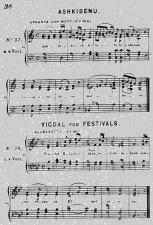 oxford
views updated
Jewish music. It is apparent from the Old Testament and from archaeological discoveries that instr. and vocal mus. has always played a part in Jewish life, both on sacred and secular occasions. After the destruction of the Second Temple, instr. mus. was banned as a token of mourning, but the shofar was retained as the ritual horn and decorative bells were attached to the curtain covering the Ark. Instr. mus. was later permitted at weddings and festive events. The oldest element of synagogue mus. is still the cantillation of biblical texts, from which synagogue prayer chants derived. These chants were orally transmitted from generation to generation by cantor-composers. In the middle of the 19th cent. cantorial schools were founded as moves towards a printed repertory began. 19th-cent. Jewish liturgical composers incl. Solomon Sulzer (1804–90), Samuel Naumburg (1815–80), Hirsch Weintraub (1811–81), and Boruch Schorr (1823–1904). In the 20th cent., liturgical services have been comp. by Paul Ben-Haim, Bloch, Milhaud, and Castelnuovo-Tedesco.

World Music , The term “world music” was first circulated in ethnomusicology (the study of music in or as culture) and entered Western popular culture as a categor… Gyorgy Ligeti , Ligeti, György György Ligeti Composer Stepping into the intriguing, multi-dimensional, thought-provoking musical world of composer György Ligeti is a… Ethnomusicology , Ethnomusicology BIBLIOGRAPHY Although there is no universally accepted definition of ethnomusicology, a few words stand out in most definitions: “sou… Mus , Mus. Abbreviation for ‘Music’, as in B.Mus. (Bachelor of Music), D.Mus. (Doctor of Music), etc. Byzantine Music , Byzantine music, the music of the Byzantine Empire composed to Greek texts as ceremonial, festival, or church music. Long thought to be only a furthe… William Schuman , Schuman, William Composer, educator, administrator William Schuman had an ordinary childhood in New York City, with little to suggest that he would b…