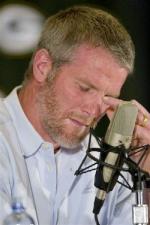 Quarterback Brett Favre, whose name rhymes with "carve," is a three-time winner of the NFL Most Valuable Player Award (1995, 1996, and 1997). Twice he led the Green Packers to the Super Bowl, winning the big game in 1997. Favre came from nowhere to become one of the game's greatest quarterbacks.

Favre grew up in Kiln, Mississippi, where his father Irvin was the local high school football and baseball coach and his mother was a special education teacher. He had two brothers and a sister, and his aunt, grandmothers, and other relatives lived nearby. Favre and both his brothers took turns quarterbacking their high school football team, but Brett was the best. Irvin Favre told William Plummer in People, "He was rawboned brute strength, plus he was smart." In an article in Sports Illustrated, Favre told Leigh Montville that most people assume

he inherited his throwing ability from his father, but joked, "Now I think I got it from my mother. She got mad at me last summer and threw a pastrami sandwich and hit me in the head. Hard. She really had something on that sandwich."

Kiln is a small town in a rural area, and Favre was completely unnoticed by college recruiters. In 1987, after being rejected from many other schools, he finally got a scholarship to the University of Southern Mississippi as a defensive back only because another player decided not to take it. Favre initially played both that position and quarterback, but he was the seventh quarterback on the depth chart for the team. By the time his freshman year started, he had worked his way up to number three. By the second half of the second game, Favre threw two touchdown passes, helping Southern Mississippi beat Tulane. Shortly after that he was the starter. Favre noted that like him, most of his teammates had been rejected by bigger, better-known schools with stronger football teams. "We thrived on that," he explained to Montville. "We'd play Alabama, Auburn, and there'd be stories in the papers about how we'd been rejected by them. We'd come out and win the game."

Favre's longtime girlfriend, Deanna Tynes, became pregnant during his sophomore year, but they did not marry. Favre recalls that he was not ready. However, the couple remained together, and raised their daughter, Brittany.

By the end of Favre's junior year, the team had altered its offense to make the best use of his abilities. Pro scouts began to take notice. During the summer before his senior year, he was injured in a car accident that required him to have 30 inches of his intestine removed. But five weeks after that surgery, he led his team to a 27-24 win over Alabama; the team finished the 1990 season at 8-4. Favre played in the Senior Bowl and the East-West Shrine game. At the Shrine game, Jets scout Ron Wolf noticed him, but the Atlanta Falcons drafted Favre before New York could. The Falcons gave Favre a three-year contract worth $1.2 million in 1991.

"I Just Really Liked Him"

Wolf, however, did not forget Favre, and on February 10 of 1992, when he had a new job as the Green Bay Packers' general manager, he acquired Favre for the Packers. The young quarterback had thrown only five passes all season, and was on the Falcons' third string signal caller, so Wolf's decision seemed questionable, but he recalled to Montville, "I just really liked him. He has that unexplainable something about him."

Favre's ascent with the Packers was aided by the fact that their starting quarterback, Don Majkowski, was benched with sprained ankle ligaments. Favre stepped in, won two games, and never stepped out. He finished the 1992 season with 302 completions for 3,227 yards and 18 touchdowns. The Packers missed the playoffs only in the final week of the season. That year, Favre was selected for the Pro Bowl, and the Packers redesigned the team around him. In 1993, Montville wrote, "The Packers have virtually handed their team to Favre." The team got rid of Majkowski, who was considered a hot prospect before Favre's arrival, and paid a large amount of money to bring in free agent Reggie White. Montville commented, "They are making a run for a division title, making it with a kid quarterback."

Despite his talent, Favre sometimes clashed with Green Bay coach Mike Holmgren, who insisted that Favre study plays and run them as they were planned. Favre, on the other hand, was used to a more intuitive style of play. In Sports Illustrated, Peter King commented, "Favre is an act-first, think-later gunslinger who, until he reached the NFL in 1991, hadn't run something as elementary as the seven-on-seven passing drill." Favre, on the other hand, did not like memorizing complicated plays because in real life, the opposing players seldom did what they were expected to do. Favre gave King an example: "We'd call Red Right, 22 Z In. I didn't care what the defense did, I was going to the Z [the flanker] and if he was covered, boom, I was gone. I was running, trying to make something happen." Eventually, however, the two men were able to learn from each other and by 1995 Holmgren was seeking Favre's opinion on plays. Favre memorized Holmgren's advice: "Relax. Play smart."

In 1995, Favre was named NFL MVP, largely because he led the Packers to an 11-5 record and a spot in the NFC Championship Game. The Packers lost that game to the Dallas Cowboys, 38-27, but Favre swore he would do his best to bring the team back to the Super Bowl in the following season—and win it.

"Is My Daddy Going to Die?"

However, during the 1995 season he had become addicted to the painkiller Vicodin, a narcotic. Tynes told Ken Fuson in Esquire that in late 1995 she was cleaning out the closet and "found a bunch of little packs kind of rolled up in there. A week later, they'd be gone. I'd think, Jeez, that's a lot of pain pills." She asked Favre about it, and "he got real defensive." The drug let Favre keep playing through numerous injuries, but it changed his personality, making him anxious, angry, and unable to sleep. Tynes started throwing out the drugs when she found them, but Favre always had more, and she eventually threatened to leave him if he didn't stop. "Every-body thinks Brett's so tough," she revealed to Fuson, "but they haven't met me yet."

In February of 1996, Favre suffered a seizure, brought on by the drugs. His seven-year-old daughter Brittany, seeing this, asked, "Is my daddy going to die?" Three months later Favre admitted he had a problem and entered an inpatient rehabilitation clinic for 45 days. As part of his treatment plan, NFL doctors told him he couldn't drink alcohol for two years after he was released. On July 14, 16 days after he left the rehab clinic, he married Tynes in Green Bay.

After the Super Bowl years, Favre seemed to slow down. Paul Attner wrote in the Sporting News, "The more he altered his personal habits by shedding an addiction to painkillers, swearing off beer, dropping out of the fast lane, marrying his longtime girlfriend, fathering a second child, the less impressive he has been as a quarterback." In 1999, Green Bay had only an 8-8 record, which led the team to fire its new coach, Ray Rhodes. That year, Favre had 22 touchdowns and 23 interceptions, showing a decline in his performance. Part of this was due to a thumb injury that prevented him from throwing well. "And," Attner wrote, "the losses piled up until the Packers became average, and their quarterback didn't play well enough to make the Pro Bowl, one of the most astonishing developments of the 1999 season."

"The Most Important Thing"

Favre, however, was busy off the field. His second daughter, Breleigh, had been born in July of 1999, after in-vitro fertilization and a very difficult pregnancy for Deanna. He told Attner, "I want to be there, I want to be the first person she sees when she wakes up and the last person she sees when she goes to sleep. I think it happens to a lot of men. No matter how tough you are or how big you are, when you have a little girl it tames you." He said that he regretted not being a better father when Brittany was young. "I realize that my family is the most important thing."

Perhaps because of this change in focus, or because he suffered from tendinitis of his right elbow, in the 2000 season, Favre had only 20 touchdown passes and had 16 interceptions. As Devid Elfin pointed out in the Washington Times, "He didn't get an MVP vote, let alone win the award."

In 2001, Favre returned to his former level of play with his best season since 1997. In the regular season, he threw 32 touchdowns, more than in any season since he won the 1997 MVP award; and had only 15 interceptions, his fewest since 1997. He was rated the fourth-best passer in the NFL with a rating of 94.1.

In 2002, Favre continued to play well, but began considering retirement. "I miss home [in Hattiesburg, Mississippi]," he told Peter King in Sports Illustrated. However, if he continued playing, King noted, he could break every quarterback record on the books. Favre told King, "Shoot, if I thought like that, I'd be playing for the wrong reason."

"I went to [a drug rehabilitation clinic in] Topeka," says Favre, "because the pills had gotten the best of me…. It was hard—I was someone used to doing what I wanted to do. But now I feel I have a way to handle stress without pills. The biggest thing I've learned is to turn to the people around me—friends, coaches, [longtime girlfriend] Deanna [Tynes]. Before, I was keeping a lot of things inside me."