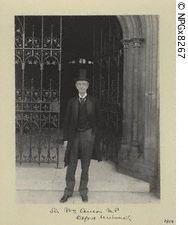 oxford
views updated
Comper, Sir John Ninian (1864–1960). Aberdeen-born British architect. Whilst in the office of Bodley and Garner (1882–7), he learnt the intricacies and subtleties of late English Gothic. In partnership (1888–1905) with William Bucknall (1851–1944), he designed the exquisite Church of St Cyprian, Clarence Gate, London (1902–3), in which the altar is visible from all parts of the church and the sanctuary is defined using gilded screens influenced by C14 English prototypes favoured by Bodley. A scholar of Ecclesiology, Comper revived the ‘English’ altar with its riddel-posts at St Wilfrid's Church, Cantley, Yorks. (1892–4—where he also designed the north arcade and aisle, Rood-screen and loft, parclose-screens, reredos, and altar-canopy, all in an archaeologically correct late-Gothic style), and became a prolific designer of and authority on church fittings, furnishings, and, especially, stained glass.

His richest creation is St Mary's, Wellingborough, Northants. (1904–31), in which Classical elements made their appearance, notably in the ciborium, and the plaster vaulting in the nave has pendants. He moved towards giving the altar a new dominance in Anglican church architecture, and was a major influence on the liturgical revival: with St Philip, Cosham, Portsmouth, Hants. (1936–7), his ideal of ‘unity by inclusion’, drawing on various styles, combined with a free-standing sanctuary to realize a solution to church planning which accomplished the supremacy of the altar. One of his last works was the altar and reredos in Craze's Shrine of Our Lady of Walsingham, Norfolk (1959).