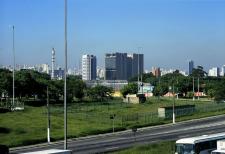 Ruy Barbosa (1849-1923) was a Brazilian lawyer, journalist, and politician. He was probably the most intellectually gifted Latin American political figure of his time.

Ruy Barbosa was born on Nov. 5, 1849, in São Salvador, Bahia, into a long-established family of Portuguese descent. From 1866 to 1870 he studied in the law schools of Recife and São Paulo, where he enthusiastically joined the abolitionist movement. His liberal ideas were equally well articulated in his own abolitionist paper, O Radical Paulistano, and in his stirring speeches before organizations and student groups in São Paulo. Returning to Bahia after graduation, he joined the Liberal party and became the editor of the Diário da Bahia to continue his antislavery campaign.

Barbosa's first major publication appeared in 1877 with his translation of The Pope and the Council, a German work published about a decade earlier which attacked the doctrine of papal infallibility. The preface to this work is an outstanding example of his excellent prose style.

In 1878 he was elected to the national Chamber of Deputies, where he staunchly supported educational reform and abolition. In recognition of his detailed report on the national educational system, he was granted the title of Counselor of the Empire in 1881. His position on abolition, however, doomed his bid for reelection.

Long an admirer of British parliamentary monarchy, Barbosa favored decentralization of the empire rather than a republic. When abolition was decreed in May 1888, Barbosa immediately accelerated his demand for federalization of the empire in another of his papers, the Diário de Noticias. After the military coup which deposed Pedro II, Barbosa was selected as Manoel Deodoro da Fonseca's vice chief of the provisional government and was given the portfolios of the ministries of finance and justice, as well as being charged with writing the constitution.

As minister of finance, Barbosa inherited the failing imperial economy. His continuance of the encilhmento (a period of frenzied financial speculation on the Brazilian stock market) and authorization of the issuance of paper money only exacerbated the financial crisis. He resigned his position, along with the rest of Deodoro's Cabinet, during the ministerial crisis in January 1891, and later attacked Deodoro's successor, Floriano Peixoto, for his disregard of the constitution.

Accused of being one of the conspirators in the September 1893 naval revolt, Barbosa fled to Buenos Aires and later to London. While in London he wrote a series of letters giving his impressions and observations of the European scene. This series, later published as his excellent Cartas da Inglaterra (Letters from England), began in January 1895 with an eloquent plea for justice in the Dreyfus case.

Returning to Brazil after the election of Prudente de Morais in late 1895, he won a seat in the Senate and urged a general amnesty for all those implicated in the revolts of 1893-1894. He led the Brazilian delegation to the Second Hague Conference in 1907 and won international acclaim as "The Eagle of The Hague" for his stout defense of the legal equality of nations, his mastery of international law, and his splendid oratory in several languages. The next year he became a member of the Permanent Court of Arbitration at The Hague.

In 1909 Barbosa resigned his position as vice president of the Senate to oppose the military candidate Hermes da Fonseca for the Brazilian presidency. Although his anti-militarist campaign was the greatest popular electoral drive that Brazil had ever seen, political manipulation deprived him of victory.

During World War I Barbosa advised Brazilian neutrality and later refused, for personal and political reasons, to head the Brazilian delegation to the Versailles Peace Conference. He died in Rio de Janeiro on March 1, 1923.

In addition to his political renown, Barbosa is also considered one of Brazil's greatest scholars and perhaps the outstanding prose writer of the Portuguese language. He was a preeminent linguist who spoke fluent English, French, Spanish, and Italian and possessed a commanding knowledge of the classical languages. His 40,000-volume multilanguage library was purported to be the largest private collection in Latin America.

The best book in English on Ruy Barbosa is Charles W. Turner's laudatory Ruy Barbosa: Brazilian Crusader for the Essential Freedoms (1945). By no means a complete biography, it does present an interpretation of the man and his thought based on extensive study of his writings and public activities. Harold E. Davis, Latin American Leaders (1949), includes an excellent biographical sketch of Barbosa. □