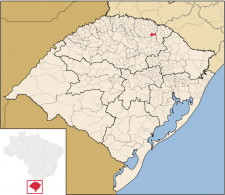 Floriano Peixoto (1839-1895) was the second president of Brazil. His ruthless leadership as the "Iron Marshall" in the face of widespread armed rebellion is given credit for holding Brazil together in the early republican period.

Floriano Peixoto was born into a planter-class family of small landholdings in Maceió, Alagoas, on April 30, 1839. While still a youth, he enlisted in the army as a common soldier. In 1861 he entered the military school in Rio to study military engineering. Leaving the school in 1865 to fight in the Paraguayan War, he earned successive promotions to lieutenant colonel.

After the war Peixoto returned to Rio, finished his engineering course, and held a series of minor commissions. By 1883 he had risen to the rank of brigadier general, and the following year he became president and military commander of the province of Mato Grosso.

When the monarchy fell in November 1889, Peixoto was simultaneously serving as field marshal, adjutant general, and senator from Alagoas. Feigning loyalty to the empire, he joined the rebelling army and led the coup when illness incapacitated Marshal Manoel Deodoro da Fonseca.

In May 1890 Peixoto became minister of war in Deodoro's provisional government. On Feb. 24, 1891, the Constituent Assembly elected Deodoro Brazil's first president and Peixoto the vice president. Peixoto soon aligned with the Congress, with whom Deodoro was constantly fighting, and his home became a meeting place for enemies of the President. Deodoro's limited political ability and continuous altercations with the Congress led to his resignation on Nov. 24, 1891. The following day Peixoto became Brazil's second president.

Although Peixoto quickly and ruthlessly crushed all opposition, the most serious threats to his position came from the province of Rio Grande do Sul and the navy. In Rio Grande insurgents bearing the standards of federalism and positivism launched an attack from Uruguay on Feb. 9, 1893.

On Sept. 6, 1893, Adm. Custódio José de Mello led a naval revolt in Guanabara Bay. Mello controlled the sea but failed to get any land support and made no attempt to join with the rebels in Rio Grande. The army remained loyal to Peixoto and securely fortified Rio. The two forces reached an impasse, and the navy finally surrendered on April 16, 1894. Mello and the naval leaders, plus many defeated Rio Grande federalists, fled to Buenos Aires. The flight of these two groups terminated the pronouncements, but Peixoto followed his victories with summary executions, bloody reprisals, and firm dictatorship.

As the end of Peixoto's term approached, many feared that he would lead a coup and continue his regime. Lack of adequate support, and perhaps more significant, increasingly poor health, forced him to accept a new election. On Nov. 15, 1894, Prudente de Morais Barros took office, and a short time later Peixoto fell gravely ill. He died in Barra Mansa, Rio de Janeiro, on June 29, 1895.