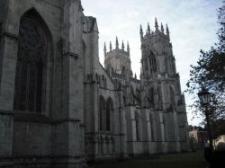 Alcuin is not famous for contributing to a specific scientific discipline; rather, his reputation and renown are based upon more general accomplishments. As Charlemagne’s educational advisor, he brought AngloSaxon learning and teaching methods to the Franks.

Alcuin was born of a noble Northumbrain family. His English name was Ealhwine (Alchvine), but he preferred the Latin form, Albinus; at the court of Charlemagne he acquired the surname Flaccus. Educated at the cathedral school of York under the supervision of the archbishops Egbert and Aelbert, he was exposed to the best traditions of the early English schools. The school of York was heir to the rich pedagogical legacy of the Venerable Bede, and by the beginning of the eighth century its library was the finest in England. The methods and curriculum developed at York brought vitality to early medieval learning.

Alcuin’s abilities attracted the attention of his teachers, and he became the proègè of Aelbert. At the death of Egbert in 766, Aelbert became archbishop and Alcuin assumed a major role in the leadership of the school; in 778 he became head of the school and library. When Eanbald became archbishop in 780, Alcuin was sent to Rome to receive the pallium. On his return journey the following year, he met Charlemagne at Parma. By this time Alcuin’s fame as an educator and scholar had spread to the Continent. The Frankish king needed a competent educational advisor, for education in his kingdom was in a state of decline; he therefore invited Alcuin to become his minister of education. Upon accepting the offer in 782, Alcuin initiated a reform of the Frankish schools. He now became the guiding force behind Charlemagne’s educational policies and the leading spirit of the palace school. Charlemagne rewarded Alcuin well for his services: he was granted the abbeys of Ferrières, Troyes, and St. Martin at Tours.

Alcuin popularized the study of the seven liberal arts in France and wrote elementary textbooks on these subjects. While these works do not demonstrate brillant philosophical insight, they do reflect the mind of a creative teacher. His dialogue method of instruction brought needed vitality to teaching; there was now more give and take between teacher and pupil. The emphasis on the elementary subjects of the trivium and quadrivium encouraged both secular and sacred learning—indeed, the schools themselves were opened to both clerics and laymen, for both church and state needed educated servants.

The knowledge of science imparted by the schools was restricted, and Alcuin’s works show only a limited awareness of the physical world. In his Disputation of the Royal and Most Noble Youth Pepin with Albinus, the Scholastic, there is a very general discussion of man, the universe, and the natural world. This work is presented in the form of 101 questions, problems, and riddles, with symbolic answers. There are almost no natural or scientific answers; the explanations are in terms of effects rater than causes:

Pepin: What is the sun?
Albinos: The splendor of the universe beauty of
the sky, the glory of the day, the divider of the hours.

Alcuin expressed some interest in astronomy but it was an interest based on the need for an under standling of calendrical calculations. He helped to develop the Continental interest in the computus, and to aid the development of the skills needed to establish the date of Easter, he encouraged the study of mathematics.

In the work ascribed to him Propositions for sharpening the Minds of Youth, Alcuin presents fifty-three mathematical puzzles. While some can be solved through elaborate and ingenious calculations, many of them require geometrical and algebraic solutions. His encouragement of education was a valuable stimulant to the culture of Charlemagne’ realm, and thus the left a lasting legacy to both the culture and the science of Europe.

I. Original Works Alcuin’s writings both in verse and in prose, cover wide range of subjects. They can be topically classified an educational texts, philosophical text and theological treatises, historical works and letters. Collected editions of his writings have been made by A. Quercentanus (Paris, 1617) and Frobenius Forster, Alcuini opera (Regens burg, 1777). The latter edition is reprinted in J.P. Migne Patrologia Latina C and CI; the letters are in W. Watten bach and E.L. Duemmler. eds., Monumenia Alcuniana Vol. VI of Biblitheca Rerum Germanicarum, P. Jaffe, ed. (Berlin, 1873).

The English churchman Alcuin of York (c. 730-804) was an educator, statesman, and liturgist. In the total range of his talents he was unequaled by any other man of his time.

Born in or near York, Alcuin was early entrusted to the cathedral school there under the master teacher, Egbert, who had been a pupil of the great English historian Bede. When Egbert became archbishop of York, Alcuin had the rare good fortune to study under the scholars Aelbert and Eadbert. With the former, Alcuin visited the Continent to secure books and art treasures to enrich the library at York, which until its demolition in the Danish wars was the greatest library in the Western world.

Alcuin's education was firmly classical, since at this time the vast resources of Mediterranean erudition were being poured into England by such men as Paulinus, Theodore, and Hadrian. And under the impact of Bede, such secular studies as literature, science, history, and music, which were uncommon in early monastic schools, were also included in the curriculum. Dedicated to learning, Alcuin was promoted by the time he was 30 from student to teacher, and later to master. In the meantime he was ordained deacon, but he never advanced to the priesthood.

Coming back from a visit to Rome in 781, Alcuin happened to meet the future emperor Charlemagne at Parma. The serious, learned, and sagacious teacher made a deep impression on the Frankish leader. He urged Alcuin to take charge of the palace school, which had been established not only to educate royalty and nobility, but also to prepare missionaries and scholars to instruct the heathen tribes he intended to integrate into his projected Christian empire. The proposal was approved by the Northumbrian bishops, and Alcuin gradually weaned himself from his beloved York. In 782 he joined Charlemagne in Frankland. From then on he visited England only occasionally as an agent and personal representative of Charlemagne.

Alcuin set about developing the school. His was not an original mind, but he brought to his task great persistence and a mind that was an extraordinarily capacious storehouse of knowledge. Gradually Charlemagne drew him into an ever-closer collaboration on matters of state-craft.

Besides establishing his school, which became a center of Western culture, Alcuin wrote important political and liturgical works. He composed a number of significant official documents, which were believed until recently entirely the work of Charlemagne. These included decisions of the thorny problems of iconoclasm and the Spanish heresy of adoptionism. Alcuin's liturgical guide took into account both universally and locally observed rites and served as the basis of the Missal until the Second Vatican Council.

After serving Charlemagne for many years, Alcuin withdrew to the abbey of St. Martin of Tours and died there in 804.

Eleanor Shipley Duckett, Alcuin, Friend of Charlemagne: His World and His Work (1951), is a definitive study of Alcuin's life, times, and work. Luitpold Wallach, Alcuin and Charlemagne: Studies in Carolingian History and Literature (1959), concentrates on Alcuin's political influence and examines the question of authorship of the state papers prepared for Charlemagne. Gerald Ellard, a renowned liturgist, in Master Alcuin, Liturgist, a Partner of Our Piety (1956), shows how capably Deacon Alcuin reorganized the sacramentary at the behest of Charlemagne. The best background studies of the age of Charlemagne are in German and French, but for a study of England in the 8th and 9th centuries Peter Hunter Blair, An Introduction to Anglo-Saxon England (1956), is excellent. See also Philippe Wolff, The Cultural Awakening (trans. 1968). □