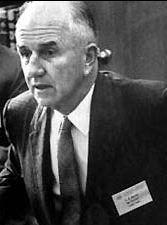 
Stephen D. Bechtel (1900–89), a man who directed some of the twentieth century's greatest construction feats, possessed extraordinary imagination and organizational abilities. Beginning with his work on the Hoover Dam in the 1930s, he thrived on surmounting nearly impossible challenges. In naming him one of its 100 most influential persons of the twentieth century, Time magazine said, "Only a man who thought on the grandest scale could build the world's biggest engineering projects. . . . Thinking big was Steve Bechtel's forte."

Young Bechtel spent school vacations working with his father and brothers on rugged railroad construction projects throughout the West. During World War I Bechtel served in France with the Twentieth Engineers, American Expeditionary Force. After the war he attended the University of California at Berkeley but left before graduation to join his father in the construction business.

Bechtel's father founded the W. A. Bechtel Company in California in 1925 and appointed his son its vice president. The company built many of the roads, tunnels, bridges, pipelines, and dams that fueled West Coast economic growth in the twentieth century. In 1931 the elder Bechtel organized six companies in a successful bid to build one of the largest construction projects in history, the Hoover Dam. When his father died suddenly in 1933, Bechtel became president of the family company and chief executive of the dam project.

The Hoover Dam, which eventually transformed the economy of much of the West, was completed in a remarkably short five years, at a cost of $54 million. The scale of the project was immense. The dam, which rises 70 feet in the air, required 4.4 million cubic yards of concrete to build. 5,000 workers at a time toiled on the project, excavating 3.7 million cubic yards of rock.

Bechtel followed the success of the Hoover Dam project with the 8.2-mile San Francisco–Oakland Bay Bridge. In 1936 he joined with steel executive John A. McCone (1909–1991), who later became director of the CIA, to form Bechtel-McCone Corporation, a firm concentrating on designing and building petroleum refineries and chemical plants. During World War II, Bechtel's companies and joint ventures turned their efforts to supporting U.S. defense efforts. The shipyards his companies organized built 560 vessels between 1941 and 1945. Bechtel's companies also guided the work of aircraft modification plants and constructed naval bases and other key defense facilities.

In 1946, following the war, Bechtel consolidated his various companies into the Bechtel Corporation and began to build many of the world's oil pipelines, including the 1,600-mile Alaska pipeline and, beginning in 1947, the Trans-Arabian (1,068 miles) pipeline that opened up Mideast oil reserves to the world.

Bechtel was widely recognized as a man of unusual vision. In his last years he was actively engaged in building a new city, Jubail, on the site of a former fishing village in Saudi Arabia. He pioneered the concept of "turnkey" projects—projects that remained entirely under his company's supervision and responsibility until they were completed. Coordinating the work of several contractors with Bechtel as project manager was another of his initiatives that took root and helped his company to flourish.

Bechtel resigned as president and CEO of Bechtel Corporation in 1960. He remained active in the company's affairs until his death in 1989 (at age 88), first as chairman of the board and later as senior director. He had built the company from revenues of less than $20 million when he took it over in 1936 to $463 million when he retired in 1960. By 1997 the company was posting annual revenues of $11.3 billion. Since 1898 four generations of the Bechtel family have guided the family-owned business through 19,000 projects which included transit systems in San Francisco, Washington, D.C., and Athens, Greece, the Boston expressway project, and the Hong Kong airport.

McCartney, Laton. Friends in High Places: The Bechtel Story: The Most Secret Corporation and How It Engineered the World. New York: Simon and Schuster, 1988.

Stephen Davison Bechtel (1900-1989) was a construction engineer and business executive whose firm, the Bechtel Corporation, concentrated on building oil pipelines and refineries, power plants, and factories.

Bechtel was interested in expanding the scope and the variety of his firm's operations, and he foresaw opportunity and profit in California's booming oil industry. He persuaded his father to take on the company's first oil pipeline job for Standard Oil of California in 1928; the line ran from the San Joaquin Valley to the Pacific. Bechtel became president of the Bechtel Company three years after his father's death in 1933. In 1937 he started up a new venture with a college friend, John McCone, the Bechtel-McCone Corporation. The firm specialized in engineering and building oil refineries and chemical plants.

With the outbreak of World War II, both the Bechtel Company and Bechtel-McCone shifted their operations to meet defense demands. Bechtel was president and director of the California Shipbuilding Corporation, which built and ran a huge yard at Terminal Island in Los Angeles. He was also a vice president of the Marinship Corporation, which built a tanker shipyard at Sausalito. Together, the Bechtel shipyards furnished more than 460 freighters and 90 tankers during the war; Bechtel was the nation's third largest shipbuilder, behind Kaiser and Bethlehem.

Bechtel was also a member of the executive committee of Contractors Pacific Naval Air Bases, which built the Navy's airfields in the Pacific. His firm took on more pipeline and refinery construction in the United States. Bechtel-McCone sponsored the building of the Birmingham Aircraft Modification Center in 1943 and later operated the plant for the Army Air Corps. The center modified almost 6, 000 planes for defense purposes and also manufactured trucks and airplane wings.

After World War II, Bechtel consolidated all his various domestic companies into the Bechtel Corporation, of which he was president. The firm carried out Bechtel's earlier goals of diversification and expansion into the energy field and also explored new geographic frontiers. It engineered and/or constructed oil pipelines and refineries, electric power plants, and chemical and industrial plants. Bechtel boasted the firm would build anything anywhere, whatever the size or specifications.

Although Bechtel remained knowledgeable about the fundamentals of construction work, his special role within the corporation was as planner and policymaker. He had the ability to see the need for a particular project and to analyze the way his firm could organize, develop, and construct it. The 718-mile pipeline through the Canadian Rockies was one such Bechtel project. In 1949 at a luncheon in Los Angeles, Bechtel and oil company executives were discussing newly discovered oil fields in Alberta. Recognizing the increased demand for oil in the Pacific Northwest and the need for a pipeline, Bechtel reportedly began drawing maps and plans on the tablecloth. He ordered studies on the market for oil, the possibilities of financing, and the technical demands of laying the pipeline. In 1953 a Bechtel affiliate, Trans Mountain Oil Pipeline Company, completed the $93 million venture.

After World War II, the Bechtel Corporation was also active in the Mideast. In 1948, the firm began construction of the huge oil pipeline through Saudi Arabia to bring crude oil from the Persian Gulf to Sidon on the Mediterranean. The company also built a mammoth oil refinery at Aden, on the Red Sea, for Anglo-Iranian Oil.

The power division of the Bechtel Corporation was responsible for the major construction of electric power plants for public utilities in California, Utah, Florida, Arizona, and Hawaii. Bechtel also built thermoelectric power plants in Korea. The huge electric power plant at Joppa, Illinois, became a Bechtel project in 1953 after the previous contractor became involved in a series of labor disputes. Beginning in the 1960s Bechtel was part of the Nuclear Power Group to construct nuclear reactors for electric power plants, and he continued to explore new technologies, new energy needs, and resources.

Under Bechtel's leadership, the Bechtel Corporation, later the Bechtel Group, grew from a large California-based construction firm to a giant corporation with interests and affiliates around the world. The company's style, like that of Bechtel himself, was to take on a series of large, imaginative, separate projects rather than to concentrate on one engineering or manufacturing process. Bechtel received numerous honorary degrees, including an LL.D. from the University of California where he was once a student, and various awards in construction, engineering, and business. He was a member of the Business Advisory Council of the Commerce Department and served on the Presidential Advisory Commission on Highways. He sat on the boards of other large corporations and was active in educational organizations.

Bechtel was married in 1923 to Laura Adeline Peart, and the couple had two children. His daughter was a registered nurse and his son became chairman of the Bechtel Group, of which his father was senior director. Bechtel died at the age of 88 in March of 1989.

There is no biography of Bechtel, but there are entries in the National Cyclopaedia of American Biography (1947-1952) and in the Biographical Dictionary of American Business Leaders (1983). An extensive profile appeared in Fortune (November 1955).

Additional information of the Bechtel Group can be found in Laton Mc Cartney's Friends in High Places (1988) and Bechtel's obituary can be found in Time (March 27, 1989). □