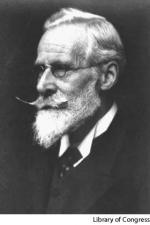 oxford
views updated
Geikie, SirArchibald (1835–1924)Director of the British Geological Survey from 1881 to 1901, Geikie made studies of glacial and fluvial erosion, and attempted to calculate the age of the Earth from rates of denudation. This led to conflict with Lord Kelvin ( William Thomson, 1824–1907), then the most eminent of British physicists and a pioneer in the study of thermodynamics, who had calculated a much shorter age for the Earth, based on its rate of cooling from an originally hot state. Geikie was also one of the first historians of geology, stressing in his Founders of Geology (1897, 1905) the importance of the work of his fellow Scot James Hutton.

A Dictionary of Ecology MICHAEL ALLABY

Sir Gawain , Skip to main content Sir Gawain Sir John Harington , Sir John Harington Harington, Sir John Harington, Sir John (1560–1612). Epigrammatist. Son of two of Elizabeth's loyal servitors, thereby her godson,… Sir Julian Sorell Huxley , Huxley, Sir Julian Sorell More From Encyclopedia.com Home About Us Royal Society , Royal Society, oldest scientific organization in Great Britain and one of the oldest in Europe. It was founded in 1660 by a group of learned men in L… Sir Douglas Mawson , Sir Douglas Mawson Sir Douglas Mawson (1882-1958) was an Australian scientist and explorer of the Antarctic. His intellectual boldness and skill were… Sir William Petty , Sir William Petty (1623–1687), scientist and statistician, first came to public notice in Ireland in the 1650s. He was set on the path of scientific…