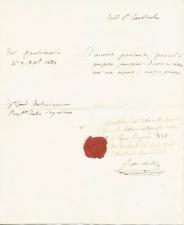 Gregory XVI (1765–1846) was the last monk to be elected pope and the last non-bishop to be elected. Extremely conservative in his views, he was the two hundred and fifty-second member in a line of popes dating back to Peter the Apostle. Gregory XVI authored 11 papal letters.

Gregory XVI was born Bartolomeo Alberto Cappellari in 1765. His parents—Giovanni Battista, a lawyer, and Giulia Cesa-Pagani—were members of the Italian aristocracy. At age 18 and against the wishes of his family, Cappellari entered a Benedictine community called the Camaldolese, at the monastery of San Michele di Murano near Venice. Living under the religious name of Mauro, he embraced the community's harsh lifestyle of fasting and silence. After a three-year novitiate, in 1786 he professed solemn vows as a lifetime member of the order. In 1787 he was ordained a priest.

Early Service in the Priesthood

Newly ordained, Dom Mauro studied science and philosophy and in 1780 became a professor. Known for his reactionary politics as much as for his great intellect, he was named censor librorum (of books) for his order in 1790. In 1795 he was assigned to serve in Rome, and there he published a defense of the Catholic doctrine of papal infallibility (supreme authority). The work, called The Triumph of the Holy See and the Church Against the Attacks of the Innovators, affirmed also the pope's role as a political leader. First published in 1799, the writing was widely translated and re-issued.

This forceful stance against modernism boded well for Mauro's future within the church. His nomination as Abbot of San Gregorio in Celio, Rome, in 1800, was confirmed by Pope Pius VII in 1805. Mauro then went to Venice, returning to Rome in 1807 as procurator general of the Camaldolese Order. With the abduction of Pius VII by the French in 1808, Mauro fled to San Michele. After the closure of the monastery by the Emperor in 1809, Mauro remained with the other monks in Venice and continued with his duties, dressed in lay clothing.

Mauro taught philosophy at the college at Murano until 1813, then transferred to the Camaldolese convent of Ognissanti at Padua when the school was relocated there. After Napoleon fell from power in 1814 Mauro returned to Rome and soon after received several appointments, including as consultor to various congregations, and examiner of bishops. Twice he refused to accept an appointment as bishop but resumed his position as the Abbot of San Gregorio.

Following the death of Pius VII, Mauro rose to vicar general in 1823. He was secretly named a cardinal by Pope Leo XII on March 21, 1825. The appointment was published in 1826 when Mauro was named Cardinal of San Callisto and prefect of the Congregation for the Propagation of the Faith.

Cardinal Mauro was credited with orchestrating an agreement between the Belgian Catholics and the Dutch King in 1827 and another between the Armenian Catholics and the Ottomans in 1829. When Pope Leo XII died in 1829, the conclave of cardinal electors considered Mauro as a possible successor to the papacy but passed him over at that time. With the death of Pius VIII two years later—and through the political clout of Klemens von Metternich of Austria—a group of zealot cardinals, called Zelanti, accomplished the election of Mauro. The final vote was taken on February 2, 1831, after 55 days of deliberation.

Mauro, who was elected by 32 out of 45 votes, voiced personal objections. His superior, Cardinal Zurza, ordered him to accept the honor under the law of obedience to the general of the Camaldolese order. Mauro was consecrated a bishop on the day of his election. On February 6 he was crowned Pope Gregory XVI in honor of Popes Gregory I (the Great), Gregory VII—also a Benedictine monk—and Gregory XV who founded the Society for the Propagation of the Faith.

Difficult Days for the Papacy

A popular movement for political autonomy was underway throughout the Papal States at that time; thus Gregory XVI's papacy was marred with political uprising even before the papal coronation. On February 3 rioting citizens drove the Duke of Modena from Mantua, and one February 4 the citizens of Bologna rose up against the government. As pope, Gregory subscribed to totalitarianism, establishing roadblocks to these progressive movements and opposing virtually all popular rights.

With the exception of slavery, he opposed the most basic of human freedoms: democracy, freedom of conscience, and separation of church and state. Gregory's lack of leniency created an ongoing tension, which led historians to judge him harshly, as one of the least effective popes. In the first year of his papacy he issued a papal bull, Sollicitudo ecclesia rum, encouraging church officials to establish political relationships with de facto (unofficial) governments whenever convenient. In international relations, he remained at odds with Spain, Portugal, Sweden, and Poland, and he allowed the exile of the Society of Jesus (Jesuits) from France.

Gregory XVI died on June 1, 1846; some sources date his death on June 9. In 1853 his remains were moved from the crypt of St. Peters Church into the basilica proper. A monument marking his burial spot was designed by Luigi Amici.

Despite his shortcomings, the corruption of earlier papacies never plagued Gregory XVI's reign. He introduced the Etruscan and Egyptian museums at the Vatican, although such extravagance-along with military expenditures—drained the Vatican coffers. He is remembered for his dedication to the proliferation of Catholic missions. He appointed an estimated 200 new missionaries and contributed to the establishment of 70 new dioceses and vicarships.