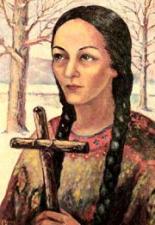 Kateri Tekakwitha (1656-1680) is the first Native American to be venerated by the Roman Catholic church. As a Christian convert, in an Iroquois community that possessed a longstanding hostility to all things French, Tekakwitha became an outcast in her village and was forced to flee to a mission near Montreal, where she died at the age of 24. Sometimes called "the Lily of the Mohawk," she was beatified by Pope John Paul II in 1980.

Tekakwitha was born in 1656 in Ossernenon, near what is modern Auriesville, New York. Her father, Kenneronkwa, was a Mohawk and member of its Turtle clan. Her mother, Kahenta, was Algonquin and hailed from a village near Trois Rivieres, Quebec. Kahenta had been converted to Christianity by early missionaries to the area. The Algonquin were one of first Native American populaces to ally with French traders but were bitter foes of the Mohawk. The Mohawk were part of the mighty Iroquois League, a confederation of Mohawk, Oneida, Onondaga, Cayuga, and Seneca nations. Politically organized and known as fierce belligerents, the Iroquois began trading with the Dutch and obtained firearms from them and used the weapons to renew hostilities with their neighbors beginning with a 1649 attack on the Huron. Several other communities were dispersed, among them the Algonquin to which Tekakwitha's mother belonged.

War had decimated the Iroquois ranks, however, and it became standard practice to take their defeated as prisoners and subsume them into the population of their Five Nations. Tekakwitha's mother had been captured by the Mohawk around 1653 and became part of a community in this way. Her union with Kenneronkwa resulted in a son and daughter, Tekakwitha. In 1660, when Tekakwitha was four years old, a smallpox epidemic decimated the community, and both her parents as well as her brother died. She survived the outbreak, though it left her face scarred and her vision impaired. She was taken in by her uncle, a village chief, who was a great foe of the Roman Catholic missionaries from France in the area. When Tekakwitha was ten years old the French emerged victorious over the Iroquois League, and the peace treaty permitted the determined order of Jesuit priests, whom the Native Americans called "Black Robes," access to Mohawk villages in order to convert the residents to Christianity.

Tekakwitha's uncle was forced to be hospitable to three Jesuits fathers named Fremin, Bruyas, and Pierron, and assigned the 11-year-old Tekakwitha to look after them. She was reportedly impressed by their exemplary manners and conduct, and though she likely knew her mother was Christian, this may have been her first genuine introduction to Christianity. Eventually the Jesuits established St. Peter's Mission in 1670 and consecrated a chapel inside one of the traditional Iroquois longhouse dwellings. Two missionaries who took over noted that as a teen Tekakwitha became increasingly devout and rejected her family's attempts to arrange a marriage. They grew increasingly angry at her behavior and sometimes denied her food for her obstinacy.

It is likely that Tekakwitha had heard about a community of unwed women in Quebec who lived together in devotion to their Roman Catholic faith, as the Jesuits did; these women were called the Ursuline sisters. There was also some history of virgins and voluntary chastity in the Iroquois nation. However, Europeans had reportedly given these women alcohol and their behavior had brought shame on the Iroquois; such professions of celibacy had subsequently been prohibited. Tekakwitha's determination to remain unmarried was helped by the arrival of the Jesuit James de Lamberville in 1674 at St. Peter's. Tekakwitha confided in him that she wished to fully convert, and he encouraged her in that goal. After catechism classes, she was baptized on Easter Sunday of 1676 and given the name "Catherine," or Kateri.

Immediately Tekakwitha became a pariah in her village. "Her new religion angered her relatives and the villagers, who saw her conversion as a traitorous embracing of the white man's religion and a rejection of their own customs," noted America writer George M. Anderson. She remained there six months and was forbidden food on Sundays and Christian holidays because she refused to work in accordance with Christian doctrine. Her relatives and the other villagers increased their harassment campaign and even accused her of attempting to seduce other women's husbands at the remote prayer site she liked to visit.

To rescue her, Lamberville sent Tekakwitha to the Jesuit mission of Saint Francis Xavier, at Kanawake, Quebec, on the Sault Saint Louis straits. She made the 200-mile trip in 1677 with the help of other converted Native Americans, at a time when her vision was worsening. Her relatives were furious and sent a search party after her, but she was able to hide in tall grasses and elude them with the help of her traveling companions. The Saint Francis Xavier mission had several Christian Native Americans in residency, about 150 families, and Tekakwitha found a sympathetic spiritual mentor in Anastasie Tegonhatsiongo, who had known her mother. Tegonhatsiongo, however, agreed with Tekakwitha's family and believed it would be best if she married.

Known for Her Piety

Tekakwitha was still determined to become a nun, however, and at one point made a trip to Montreal and met the sisters of the Hotel-Dieu hospital there. She had gone with two other Native American women, and the three resolved to form their own religious community back at Kanawake. Tegonhatsiongo requested the intervention of one Father Cholenic, who consulted his superiors on the matter; all agreed that it was far too early for an exclusively Native American cloister, but Tekakwitha was finally granted her wish and allowed to take her vow of chastity on March 25, 1679, the Feast of Annunciation.

Tekakwitha's devotion to her religion was legendary. Her "penances," wrote Anderson in America, "went far beyond such standard practices as fasting and vigils. Walking barefoot in snow and whipping herself with reeds until her back bled were among the milder ones." She ate little, and sometimes mixed what she did with ashes first. She stood for hours barefoot in the snow before the cross, praying the rosary, and spent more hours inside the mission's unheated chapel on bare knees on the stone floor. She reportedly slept on a bed of thorns for three nights and even arranged to be flagellated. Such ascetic practices were the hallmarks of the truly devout Catholic saints, but they also had some precedence in Iroquois spirituality as well. Its system of belief held great store in dreams, which were termed "the language of the soul." To not dream, the Iroquois believed, was unhealthy, and so for those that could not attain or remember their dreams, there were means to induce a trance—either via a sweat-bath, fasting, chanting, or even acts of self-mutilation. The mixing of food and ashes that Tekakwitha tried also had its origins in these practices.

In the end, Tekakwitha's punishing penances were debilitating, and she died at the age of 24 on April 17, 1680. According the Jesuits who prayed over her body afterward, the smallpox scars on her face miraculously disappeared some 15 minutes after she died. On this account she was beatified by Pope John Paul II on June 30, 1980. A petition for her canonization was submitted to the Vatican in 1884, and her sainthood requires proof of one more miracle. There are quarterlies in her honor, among them Lily of the Mohawks, and Native American Catholics consider her an important historical and spiritual figure. She is also the patroness of the environment and ecology.

TEKAKWITHA, KATERI (c. 1656–1680), native American convert to Christianity. Tekakwitha was born in the Iroquoian town of Gandahouhague, near present-day Fonda, New York. Her father was Mohawk, and her mother Algonquin, a captive adopted into the Turtle clan after a raid. When she was four years old Tekakwitha survived an attack of smallpox that killed her immediate family. The disease weakened her eyesight, and she afterward exhibited a general tendency to withdraw from social contact. By 1667, when Tekakwitha first encountered Jesuit missionaries, she was already inclined to a way of life that Christianity sanctioned. Indian townspeople exerted strong pressure to make her conform to native ways, but she persisted in her new interest. This determination culminated on Easter Day, 1676, when she was baptized by Jacques de Lamberville, S.J. The following year, local opposition to her Catholicism mounted, and she fled the region to take refuge with other Catholic Indians living along the Saint Lawrence River in Upper Canada.

Tekakwitha settled at Caughnawaga, or La Prairie de la Madeleing, an intertribal village of Christian Indians bound together more by religious allegiance than by tribal heritage. There she quickly established a reputation for austere self-denial and pious virtue. From her First Communion at Christmas 1677, until her death less than three years later, the maiden impressed all about her with her modest fervor and ardent prayers. Beset with a frail constitution, she worked as best she could in village gardens, fasted two days per week, administered flagellations, and kept a private vow of chastity. In 1678 she began a quasi-convent patterned after the Hospital Sisters of Montreal, but such rigors hastened her own end. Her death enhanced local stories about her exemplary conduct, and Indian as well as French neighbors made a shrine of her gravesite. Many were inspired by her extraordinary life, and in 1932 she was nominated for sainthood. On October 22, 1980, John Paul II pronounced her blessed, thus acknowledging her as an example of Catholic piety in colonial New France.

Lecompte, Edouard. Glory of the Mohawks: The Life of the Venerable Catharine Tekakwith. Milwaukee, 1944.