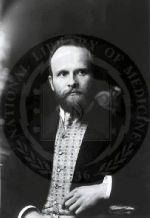 Bárány was the son of Ignaz Bárány, a bank official, and Marie Hock. He graduated from the University of Vienna on 2 April 1900, then trained in internal medicine with Noorden in Frankfurt am Main. He later studied with Kraepelin at the psychiatric-neurological clinic at Heidelberg and at the neurological clinic in Freiburg im Breisgau until April 1902. He received surgical training in the Vienna General Hospital until 30 September 1903. The next day Bárány entered service at the University of Vienna ear clinic under Adam Politzer, the founder of otology in Austria.

It is the task of the human ear not only to hear but also to be involved in the maintenance of equilibrium, the apparatus for which is found in the inner ear and consists of a space filled with fluid. The organ of equilibrium had hitherto only been the subject of investigations by various theoretical workers (Pierre Flourens, Ernst Mach, Josef Breuer, Julius Ewald), who had used pigeons and rabbits. On the basis of his observations concerning vertigo and equilibrium disturbances in patients, the French scientist Menière related these symptoms to the equilibrium system, thus terminating the period of theoretical speculative investigations of the organ.

Baárány’s main contribution was the clinical application of these experimental data to humans, which led to the development of methods of investigating the human equilibrium system. it had been known for some time that this apparatus reacted to rotatory sensations. Bárány discovered the laws governing these rotatory reactions and thus was able to define the subjective sensations of dizziness by means of such objective indications as definite eye movements and reactions of the body’s muscular system. His most important discovery was the caloric nystagmus. The organ of equilibrium can be stimulated by differences in temperature by irrigation of the ears with hot or cold liquid, a method that makes it possible to excite each organ separately. The technique is especially valuable because it can be used clinically at the bed of the patient. Bárány also proved the connection between the organ of equilibrium and centers in the brain. His work made possible the systematic interpretation of the colorful and many-sided aspects of vertigo and equilibrium disturbances, that is, to recognize them as ear-connected or originating in the nervous system. Incidentally, Bárány was able, in the course of his further studies, to investigate to relationship between the equilibrium apparatus and the nervous system, thus creating the basis for an entirely new field, otoneurology. For all these investigations he was given the title of Dozent in 1909, and in 1912 received half of the Politzer Prize. The following year he was awarded the ERB Medal of the German Neurological Society, and in 1914 the Guyot Prize for his contributions to otology.

In spite of ankylosis of the knee, Bárány volunteered for military service in 1914 in order to be able to test his ideas on the treatment of brain wounds. In 1915, while a Russian prisoner of war, he was awarded the Nobel Prize for medicine and physiology in recognition of his work on the vestibular apparatus, and was released. Two years later Bárány was appointed director of the University of Uppsala otorhino-laryngology clinic, a post he held until his death.

Bárány was a member or honorary member of numerous scientific societies. In 1924 he was awarded an honorary doctorate by the University of Stockholm.

A quiet, withdrawn researcher who worked with fanatical devotion, he lived happily with his wife, Ida Berger, who bore him two sons and a daughter, all of whom became physicians.