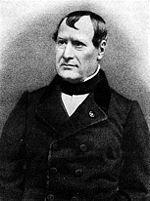 Pierre Flourens (1794-1867) was a French neurophysiologist who came from Languedoc. His intellectual aptitude became apparent to his family when he was still very young, and his education was accelerated. By the time he was 15 he was a student at the celebrated faculty of medicine at Montpellier; he received his medical degree before he was 20.

Flourens was drawn to Paris, where he became a protégé of Georges Cuvier, who introduced him to the intellectual elite of the city. In 1828 he became deputy professor to Cuvier at the Collége de France; in 1830, professor at the Musée d’Histoire Naturelle; and in 1855, professor at the Collége de France. He also became a member of the Académic des Sciences in 1828 and was made perpetual secretary of that institution in 1833. In 1840 Flourens was elected to the Académic Française.

While still a young experimenter, Pierre Flourens devised a rigorous technique for investigating the brain. Before him, researchers had plunged a trocar into the brain through a trephined aperture that permitted no precise localization and that concealed pressures and hemorrhages from the investigator. Flourens carefully uncovered the brain and its meninges, avoiding damage to the blood vessels, and precisely excised the area to be studied.

In 1822 Flourens began to study the effects of extirpation of successive layers of the cerebellum. He found that at an intermediate point of extirpation a loss of stability and motor skill appears, as if the animal, although still able to walk, run, fly, or swim, has lost its “balance wheel.” This was the original discovery of the function of coordination.

Flourens also studied the effects of eliminating one of the semicircular canals of the ear. The result was “an impetuous movement of the head,” which shifted violently in the spatial plane of the canal in question. This again was an original discovery, opening up the further study of the semicircular canals as distinct from the cochlear apparatus.

Flourens also experimented on the brain stem. In the lower portion, in the medulla oblongata, he precisely delimitated the small point that is the seat of the “vital node,” which if punctured causes instantaneous death by suddenly terminating respiration. In the upper portion a selective extirpation, anterior to the corpora quadrigemina, gave the first experimental indication of a relay in the central nervous apparatus of sight.

Finally, he made experiments on the cerebral hemispheres. This work was particularly difficult and time consuming. The terrain had been little explored by anatomists, and little was known of the connections and relays. Flourens’ work was divided into two series: in one he performed complete ablations of the cerebral hemispheres; in the other, limited ablations by regions, sometimes by progressive removal.

The series of total ablations produced the following results: loss of intelligence and judgment; loss of all voluntary initiative; and relative diminution of instinctive activities, with retention of automatic motility and locomotion.

The series of limited ablations produced losses of the same kind, greater or lesser according to the region and the individual case; but these losses were only partial and proved to be capable of attenuation or compensation.

Above all, Flourens reached the fundamental conclusion that the degree of disorder in any particular faculty seemed to depend only on the quantity of cerebral tissue removed, regardless of its location. Generalizing from this fact, Flourens became opposed in principle to all attempts to establish “cerebral localizations”; and his own doctrine of the “homogeneity” of the brain became the focus of a historic dispute.

There is, to be sure, a case against Flourens, but it should be reviewed with detachment. In the first place, Flourens, like others at that time, failed to recognize the significance of certain paralytic effects because he did not experiment on primates. Next, it should be noted that the first indisputable demonstration of cerebral localization did not occur until 1870, after Flourens had died. Last, Flourens’ conclusions with regard to the “homogeneity” of the brain and the theory that effects are related to the magnitude of the ablation were again based on experiments limited to lower mammals. Indeed, even so great an investigator as Lashley was similarly misled to conclude from his famous experiments on rats that there are “mass-action” effects.

Lately, with the refinement of physiological conceptions, the problem of homogeneity has again been raised, and some researchers have concluded that in the neocortex the highest functions of nervous integration go beyond “analytical” regional localization. These researchers explicitly evoke the memory of Flourens.

[See also NERVOUS SYSTEMS; and the biographies of BROCA and LASHLEY.]