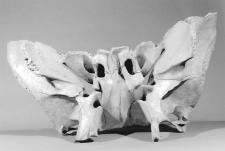 Fifth of eight children of Richard Wistar, proprietor of a glass factory at Salem, New Jersey, and his wife, Sarah Wyatt, both of whom were Quakers, Wistar attended Friends’ schools in Philadelphia and, moved, it is said, by the sufferings of the wounded at the battle of Germantown in 1777, determined to study medicine. After a preceptorship with Dr. John Redman, he entered the University of the State of Pennsylvania in 1779, and was graduated Bachelor of Medicine three years later. Although he had some difficulty in obtaining permission of the Quaker monthly meeting to go abroad, because he had fought a duel, Wistar went to England, where he studied anatomy in London under John Hunter. At Edinburgh he so impressed his instructors that, had university regulations not prevented, they would have allowed him to take a degree after only one year’s study. Wistar was equally respected by his fellow students, who elected him an annual president of both the Royal Medical Society (a student organization) and the Edinburgh Natural History Society, to the latter of which he read a paper on moisture in the atmosphere. His graduation thesis, De animo demisso (1786), was said to have given “unspeakable relief” to several Scottish hypochondriacs; and Dr. Charles Stuart of Edinburgh urged that it be translated and printed in London. After a short visit to the Continent, Wistar returned home in 1787.

As a practitioner Wistar was slow and deliberate, but accurate; he lacked the temperament for surgery. During the Philadelphia yellow fever epidemic of 1793 he remained in the city, giving Benjamin Rush aid and support; but. Thereafter he abandoned Rush’s heroic prescriptions of bleeding and purging and so lost his friendship. Wistar was an attending physician of the Philadelphia Dispensary in 1786, a physician to the Pennsylvania Hospital in 1793–1810, and in 1809 founder of a vaccine society that vaccinated 1,102 persons in its first year. Ill health forced him to give up much of his practice several years before his death.

As a medical teacher Wistar was professor of chemistry at the College of Philadelphia1 in 1789, then adjunct professor of anatomy, surgery, and midwifery at the new University of Pennsylvania in 1792; after 1810 he taught only anatomy. Through hard work he made himself an effective lecturer, and introduced two innovations in instruction: in class he employed large-scale models of the small parts of the human structure; and he divided the students into small groups (“bone classes”), giving each an assortment of bones and preparations to study and identify. As a further aid he prepared A System of Anatomy for the Use of Students of Medicine (2 vols., Philadelphia, 1811). Drawing heavily on John Innes, Monro, and Bichat, this manual went into nine editions and was pronounced by Charles Caldwell, who was not given to praising his contemporaries, as “without rival, in any language.” It was John Syng Dorsey’s judgment of Wistar that “no one could fail to become an Anatomist who diligently attended his lectures.” Wistar’s only original contribution to anatomy was an account, read in 1814, of the sphenoid sinuses (“in Transactions of the American Philosophical Society, n.s. 1 [1818], 371–374). In his latter years he wrote several papers on paleontological remains from Big Bone Lick (near Burlington), Kentucky.

Wistar married twice: in 1788 Isabella Marshall, who died in 1790; and in 1798 Elizabeth Miffin, who died in 1840, by whom he had a daughter and two sons, one of whom became a physician. Concerned since young menhood about slavery, Wistar was president of the Pennsylvania Abolition Society when he died. He was equally sensitive to the plight of the American Indians and was one of the first in the United States to appreciate their eloquence, examples of which he used to read aloud to his family. In the American Philosophical Society, to which he was elected in 1787, he succeeded Thomas Jefferson as president (1815–1818). His portrait was painted by Bass Otis, and William Rush carved a bust; and he is otherwise remembered by the lovely flowering shrub that Thomas Nuttall named for him,2 as well as for his agreeable informal suppers for friends and distinguished strangers, which, institutionalized after his death as the Wistar Association, continue little changed to this day.

2. Nuttall named the plant for his friend Caspar Wistar, but spelled it Wister. That would not cause any complication but for the fact that one branch of the family in Philadelphia spells its name Wister; and in the mid-nineteenth century. after the principals were dead, Charles J. Wister, Jr., claimed that Nuttall had named the plant for his father, who (to make the argument plausible) was an amateur of natural history. The generally accepted version is that the wisteria was named for Caspar Wistar and really should be spelled wistaria.

I. Original Works. In addition to those cited in the text, Wistar’s writings include Eulogium on Doctor William Shippen . . . (Philadelphia. 1818); several articles in Transactions of the American Philosophical Society ; and one (on curvy) in Philadelphia Medical and Physical Journal,2 . pt. (1806). His letter “To the Philadelphia General Advertiser (26 Sept. 1793); the controversy with Rush continues in letters of 4 Oct. and 1 and 8 Nov. 1793. Miscellaneous MS letters and papers are at the Historical Society of Pennsylvania, the College of Physicians of Philadelphia, and the American Philosophical Society Library.

George Logan , George Logan George Logan (1753-1821) was one of the renais sance men who governed the republic in the early days of the United States. Though little… Joseph Leidy , Leidy, Joseph Leidy, Joseph biology. A descriptive scientist of unusual range, Leidy made contributions of lasting value in human anatomy, parasitolo… Philadelphia , Philadelphia Introduction Getting There Getting Around People Neighborhoods History Government Public Safety Economy Environment Shoppping Education… Thomas Godfrey , (b. Bristol Township, Pennsylvania, 1704; d. Philadelphia, Pennsylvania, December 1749) technology. Godfrey’s major contribution was his invention of… Chaka Fattah , Fattah, Chaka 1956— Politician The Republican party may have won a majority in the U.S. House of Representatives in 1994, but a seat was still found… Robert Hare , Hare, Robert (1781-1858) Nineteenth-century professor of chemistry at the University of Pennsylvania and early advocate of Spiritualism. Among his sc…