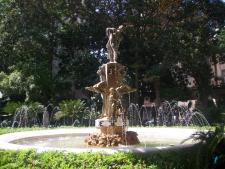 The Spanish author Gabriel Miró Ferrer (1879-1930) was one of the outstanding prose stylists of the 20th century. His preferred form was the impressionistic vignette, which appealed to the senses rather than to the intellect.

Gabriel Miró Ferrer was born on July 28, 1879, in Alicante in the bright and sunny southeastern Mediterranean region of Spain. He attended the Jesuit school in Orihuela as a boarding student during the years 1886-1891, and he graduated from secondary school in 1896. Miró began studying law in Valencia in 1896, graduating in 1900.

In 1901 Miró married Clemencia Maignon, daughter of the French consul in Alicante, and later two daughters, Olympia and Clemencia, were born to them. His first important book was Del vivir (1904). In it he introduced the character Sigüenza (Miró himself) and also began to develop the sensuous and impressionistic descriptions for which he is remembered. His first important novels were published in 1908: La novela de mi amigo and Nómada.

Perhaps Miró's most remembered writing (in literary circles) is Libro de Sigüenza, a continuing series of impressionistic vignettes beginning in 1907. In the style of this book Miró shows his affiliation with the Modernista movement of Rubén Dario. Sigüenza is a Franciscan monk; he is meditative, withdrawn, a lover of helpless animals. Above all, he is interested in colors and sights and sounds. He lives an intense life of the senses, though in a limited way; he lacks moral and intellectual fervor and thus the capacity for action.

In 1914 Miró moved to Barcelona to work in various journalistic ventures. One of the projects was the development of a religious encyclopedia, and his studies during this undertaking led him to write one of his distinctive books, Figuras de la pasión del Señor (1916). In this work, Miró focused upon various scenes in the life of Jesus, with concentration upon plastic effects and impressionistic description.

In 1921 Miró published Nuestro Padre San Daniel, followed by El obispo leproso (1926). These two novels, generally considered his finest, treat in his usual impressionistic manner his formative years in the Jesuit schools. What the novels lack in structure they make up for in sensitive presentation of the boy's emotional formation. Although Miró was not, like Miguel de Unamuno, an overt critic of the Roman Catholic Church, his criticism of its religious teaching is subtle but nevertheless effective.

After 1920 Miró lived in Madrid and worked in the Ministry of Education. He continued to write and publish until almost the time of his death on May 27, 1930.