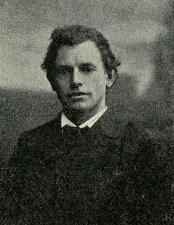 The novels and stories of the Danish author Martin Andersen Nexø (1869-1954) evoke the life of the proletariat in a manner that transcends politics and nationality.

Martin Andersen Nexø was one of 11 children of an impoverished stonecutter. After spending 6 years as a shoemaker's apprentice, he attended a folk high school where he made his first acquaintance with literature. Supporters of the school sent him abroad to recover his health after a serious illness, and, while living in Spain, he discovered that the plight of the working class was international. His first book, a collection of stories, appeared after his return to Denmark, where he worked as a teacher. After 1901 he lived exclusively by his pen.

Nexø's first novels are in the decadent, pessimistic manner common around the turn of the century. His mature authorship began with the four-volume Pelle the Conqueror (1906-1910), and from this time on Nexø devoted his writing to the awakening proletariat, the existence of which had gone virtually unnoticed in Danish literature.

Pelle is the story of a boy who grows up in extreme poverty, awakens to the injustice of his class's suffering, and develops into a leader in the workers' struggle for political power. The first two volumes constitute one of the finest stories of childhood in European literature. The novel as a whole is peopled by a large number of memorable characters, such as Pelle's father, Lasse, and the occupants of the fabulous slum tenement appropriately called the "Ark."

The title figure of Nexø's other masterpiece, the five-volume Ditte, Child of Man (1917-1921), is Pelle's female counterpart, who symbolizes the situation of the proletarian woman. While this novel gives a darker picture of proletarian life than Pelle, Nexø's optimism is seen in Ditte's lifelong vitality and in the miraculous kindness and love that she and many other characters exhibit in spite of their crushing poverty.

Today Nexø is acknowledged as one of Denmark's finest realistic storytellers, the only modern Danish writer who has an undisputed place in world literature.

The only critical treatment of Nexø work in English in book form is "Socialist Humanism: Martin Andersen Nexø Pelle the Conqueror" in Harry Slochower, Three Ways of Modern Man (1937). □