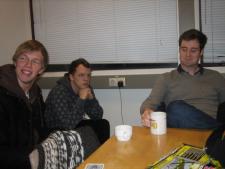 Konstantin Aksakov was a member of one of the most famous literary families in nineteenth-century Russia. His father was the well-known theater critic and memoirist Sergei Aksakov; his brother, Ivan Aksakov, was an important publicist in the 1860s and 1870s.

During his university years in the early 1830s, Konstantin Aksakov was a member of the Stankevich Circle, along with Mikhail Bakunin and Vissarion Belinsky. He underwent a period of apprenticeship to Hegel, but, like several other Slavophiles, was most influenced by his immediate family circle, which was the source of the communal values he was to espouse and the dramatic division in his thought between private and public.

Toward the end of the 1830s Aksakov drew close to Yury Samarin, and both of them fell under the direct influence of Alexei Khomyakov. Aksakov's Hegelianism proved a passing phase; he evolved into the most determinedly utopian and ideologically minded of all the early Slavophiles. A passionate critic of statist historical interpretations, Aksakov viewed Russian history as marked by a unique relationship between the state and what he called "the land" (zemlya ). At one level the division referred simply to the allegedly limited jurisdiction of state power in pre-Petrine Russia over Russian society. At another level "the land" signified the timeless religious and moral truth of Christianity, while the state, however necessary for the preservation of "the land," was external, soulless, and coercive. The Russian peasant's communal existence had to be protected from the contagion of politics. Behind Aksakov's static "Christian people's utopia" lay the romantic hatred of social and political rationalism, a passion that animated all the early Slavophiles. Aksakov died suddenly in the Ionian Islands in the midst of a rare European trip.

Riasanovsky, Nicholas. (1952). Russia and the West in the Teaching of the Slavophiles. Cambridge, MA: Harvard University Press.

Vasily Osipovich Klyuchevsky , KLYUCHEVSKY, VASILY OSIPOVICH (1841–1911), celebrated Russian historian. Vasily Klyuchevsky was born to the family of a priest of Penza province. In… Folklore , Folklore has played a vital role in the lives of the Russian people and has exerted a considerable influence on the literature, music, dance, and oth… Konstantin Nikolayevich Leontiev , Leontiev, Konstantin Nikolayevich (1831–1891), social philosopher, literary critic, and novelist. Konstantin Nikolayevich Leontiev occupied a unique… Marina Mniszech , Time of Troubles TIME OF TROUBLES In the decade and a half before the founding of the Romanov dynasty in 1613, Russia endured what has been known eve… Mikhail Petrovich Pogodin , Pogodin, Mikhail Petrovich POGODIN, MIKHAIL PETROVICH (1800–1875), prominent Russian historian, journalist, and publisher. A Slavophile and professor… Nikolai Ivanovich Novikov , Novikov, Nikolai Ivanovich (1744–1818) NOVIKOV, NIKOLAI IVANOVICH (1744–1818) NOVIKOV, NIKOLAI IVANOVICH (1744–1818), for about three decades one of…