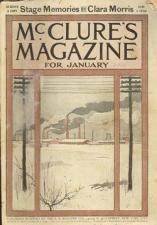 Samuel Sidney McClure (1857-1949) created the first literary syndicate and developed "muckraking," which established him as one of America's notable editors.

Born in County Antrim, Ireland, on Feb. 17, 1857, S. S. McClure was taken to the United States as a boy. Raised in poverty, he worked his way through Knox College, Galesburg, Ill., where he was an outstanding student. In 1882, by good fortune, he became editor of the Wheelman; then he was associated with the De Vinne Press in New York. Dissatisfied, McClure turned to the Century Magazine, which despite its high status he found constrictive in opportunities.

The idea of a syndicate, capable of circulating a story or article to numerous publications at a small fee, rather than to one at a large fee, became an obsession with McClure. He left regular employment to sell his idea to writers and editors. Although difficult years followed, McClure's syndicate introduced a wider audience than ever before to such authors as Rudyard Kipling and George Meredith and inspired imitators who helped create a more popular journalism and literature.

In 1893 McClure expanded his still insecure operations by issuing McClure's Magazine. It aspired to sell more widely than such elite publications as Century, yet to match it in quality. In time McClure's offered opportunities to new writers, including Jack London and O. Henry. McClure effectively encouraged writers to display their thoroughly researched topics in clear, arresting prose.

In his January 1903 issue, McClure published his milestone editorial remarking the coincidence of the magazine's articles by Lincoln Steffens on municipal corruption, Ida Tarbell on the Standard Oil Company, and Ray Standard Baker on problems of labor—an issue which inaugurated "muckraking." Other publications took up what mounted into a sensational scrutiny of American society, but McClure's continued distinguished among them.

In 1906 Steffens, Tarbell, and others of McClure's staff grew dissatisfied, partly because of McClure's own irresponsible business policies and plans. In addition they were disturbed by what they considered his conservative social perspective. They seceded from McClure's and began to issue the notable American Magazine. McClure reorganized and continued with outstanding editors and writers, including George Kibbe Turner and Willa Cather.

Yet his former associates were correct in thinking that McClure was skeptical of democracy's potential. He sought a government for, rather than of, the people. Tired and temperamental, McClure abandoned editorial work in 1914 and absorbed himself in theoretical speculations regarding democracy's workings: Obstacles to Peace (1917), The Achievements of Liberty (1935), and What Freedom Means to Man (1938). These books made little impression, and McClure himself receded into obscurity. He died on March 21, 1949, in New York.

Peter Lyon, Success Story: The Life and Times of S. S. McClure (1963), makes use of McClure's private papers and is vividly written. Louis Filler, Crusaders for American Liberalism (1939), treats McClure in the context of his times. See also McClure's My Autobiography (1914; new ed. 1963), which owes much of its distinction to Willa Cather. Harold S. Wilson, McClure's Magazine and the Muckrakers (1970), is an interesting study. □

Periodical , periodical, a publication that is issued regularly. It is distinguished from the newspaper in format in that its pages are smaller and are usually bo… Little Magazine , little magazine, term used to designate certain magazines that have as their purpose the publication of art, literature, or social theory by comparat… Malcolm Forbes , Forbes, Malcolm Forbes, Malcolm (1919-1990) Forbes Business Magazine Overview Malcolm Stevenson Forbes was one of the foremost publishers and busines… Hugh M Hefner , HEFNER, Hugh Marston (b. 9 April 1926 in Chicago, Illinois), publisher of Playboy magazine, who supported individual liberties and created a new imag… Forbes Inc , Forbes Inc. 60 5th Avenue New York, New York 10011 U.S.A. Telephone: (212) 620-2200 Toll Free: (800) 242-8786 Fax: (212) 620-2245 Web site: http://ww… Esquire , Esquire From its Depression-era origins as a men's fashion magazine with high literary aspirations, through a brief period when it threatened to devo…