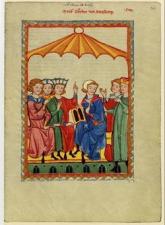 There is little information about the life of Gottfried von Strassburg. He was not of noble lineage but a freeman, had a good education, moved in higher society, and was well versed in literature, German and French, and theology. He was municipal secretary in his native Strassburg. Except for Tristan und Isolt, some lost minnesongs, and a few gnomic poems (Sprüche), no other works are known. He completed about 20,000 lines of Tristan. Fortunately the later portion of his source, the French romance of Thomas of Brittany, is extant.

The tale that Gottfried tells only for "noble hearts," a select spiritual community in the courtly world, recounts the mission of Tristan to win a bride, the fair Isolt of Ireland, for his aging uncle Mark, King of Cornwall. He succeeds, but on the return he and Isolt by mistake drink a love potion intended by Isolt's mother for the King. Unwittingly they fall madly in love. So spontaneous, overwhelming, and supernal is this love that even after Isolt and Mark are married, the reader does not think of the lovers as adulterers but as living in a world of their own, that of the "courts of love." Sordidness is ruled out. Indeed, Gottfried creates the impression that this love may even partake of the nature of a transcendent emotion. And so one follows their secret, ingeniously planned trysts almost as a well-wisher. Just as the Grail assumes a deeper meaning in the works of Wolfram von Eschenbach, representing the acme of human striving on earth and toward heaven, so the love potion here connotes the means for the perfect expression of that courtly spirit of love which does not debase but ennobles man, yet not without a strong suggestion of heresy. In Gottfried as in Wolfram, however, human suffering must precede attainment.

Mark's suspicions are often aroused; finally the lovers are detected. Tristan flees to Brittany. He weds another Isolt—of the White Hand—but only in name. Secretly he still yearns for the other Isolt. Here Gottfried's poem breaks off. Had he continued, he would doubtless have followed the plot of Thomas, who tells how Tristan is wounded by a poisoned spear and can be healed only by the arts the first Isolt had learned from her sorceress mother. Against his wife's will, Isolt is sent for—to arrive in a ship with a white sail, a black one denoting that she is not aboard. She approaches, but his wife lies to the invalid that the ship has a black sail. He dies of grief, and when his beloved arrives, she too dies, of a broken heart.

Thomas found the originally crude story as a courtly romance, which he refined. Gottfried gave it a more spiritual, mystical quality. Two other poets before Gottfried, the German Eilhart (ca. 1185) and the Frenchman Béroul (ca. 1192), both deviating from the Thomas school, are inferior in many respects. Two major German continuators of Gottfried, depending upon Eilhart, were Ulrich von Türheim (ca. 1240) and Heinrich von Freiberg (ca. 1290), a more gifted poet than Ulrich, but neither measuring up to Gottfried.

Numerous more recent writers in England, America, Germany, France, Italy, Spain, and Russia have been attracted to the theme. Richard Wagner's opera Tristan und Isolde (1859) neither deals with the legend as a whole nor follows Gottfried closely; it does, however, represent a magnificent distillation of the supernal love inherent in Gottfried's masterpiece.