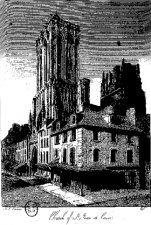 The French poet and diplomat, Saint-John Perse (1887-1975) ranks among the greatest French poets of the 20th century. His work is epic in nature, characterized by a cosmic vision and a lofty rhetoric. He won the Nobel Prize for literature in 1960.

Saint-John Perse was born Alexis Saint-Léger Léger on a family-owned island near Guadeloupe in the West Indies on May 31, 1887. At the age of 11 he went to the southern French city of Pau, where he attended school. He then studied at the University of Bordeaux and subsequently traveled extensively before establishing himself in Paris to prepare for the Foreign Service exams. He was accepted by the French Foreign Service in 1914 and spent the years from 1916 to 1921 in China. During the 1920s and 1930s he was again in Paris, rising in the service to the rank of secretary general. His brilliant diplomatic career ended in 1940, however, because he opposed appeasement of the Nazis. After the defeat of the French armies, he left France for England and Canada, and then the United States where he obtained a consultantship in French poetry at the Library of Congress. He remained in the U.S. until 1959. His eventual return to France, after so many years, became almost an apotheosis. Not only were all his political rights, honors, and privileges reinstated, but he was also acclaimed on all sides for his poetry.

The diplomat and the poet in Perse always remained apart. Unlike Paul Claudel, he refused to pursue a career on two fronts or to let his diplomatic career show through his literary works. His pseudonym, the source of which he never revealed, allowed him to establish and maintain individual identities as a diplomat and a poet.

Perse's first work, éloges (Praises), was published in 1911, before he entered the Foreign Service. It is a collection of youthful poems praising life and depicting the marvels of a tropical island. Portions of the collection had been appearing since 1909 in the Nouvelle revue française. Amitié du Prince (1921) took its inspiration from ancient sacerdotal sources.

Anabase (Anabasis), written in China and published in 1924, is the saga of a great conqueror who founds a city, crosses a desert, and takes to the high seas. Exil (Exile) appeared in 1944, after Perse had been relieved of his duties and deprived of French citizenship. Its main theme is man in exile, and it speaks for all the solitary of the earth, beginning with the poet. Here, for the first time, Perse took up the problem of the creative artist vis-à-vis society, himself, and his work. It led him into an expression of solidarity with his fellowmen and into a recognition of exile and instability as conditions of life. The preoccupations of the poems published in the early 1940s—Exile was followed by Rains and Snows—crystallized in Vents (Winds), a work of about 2, 500 lines that traces the genesis of the universe from its beginnings. The wind represents many things during the course of this epic, but basically it suggests everlasting change and movement. The sea, which was the subject of Perse's great work of the 1950s, Amers (1957; Seamarks), stands for vastness, limitless space. Together with its opposite, narrowness, it constitutes a polarity that, as a sort of life principle, inspires the poetic imagination. Again, in Chroniques (1960), nature was evoked but specifically as background for a recapitulation of human history.

Perse's enormous poetic frescoes demonstrated an epic gift uncommon today. He used a verse form of multiple cadences similar to the "verset" invented by Paul Claudel, and his tendency toward periphrase and allegory and his majestic images all suggested Claudel.

Perse died on September 20, 1975, at his villa in Giens, on the French Riviera. His substantial appeal to poets, including T.S. Eliot, and the wealth of praise accorded his work stand in sharp contrast to his creative output. "Mr. Perse's productivity was minuscule, " wrote the New York Times, "he published only seven volumes, all genuinely slender."

A general comprehensive study in English is Arthur Knodel, Saint-John Perse: A Study of His Poetry (1966). A very useful introduction, it offers a full discussion of each one of the poet's works. Other sources of information about Perse include the New York Times. □