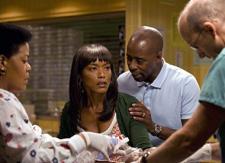 Perhaps best known for her supporting role in the hit NBC show ER, Yvette Freeman has proven that she is equally as talented as the main attraction. She has appeared in Broadway and off-Broadway productions, and co-starred in the NBC sitcom Working. She has even found the time to record a tribute album and to write and direct a film.

Yvette Freeman was born in Chester, Pennsylvania to Charles and Ruth Freeman. She is the second oldest of seven children. She grew up in Wilmington, Delaware, in a home filled with music; her father was a professional jazz pianist. She recalled in Mode magazine, “There was always music in our house. My mom didn’t even care that she couldn’t hold a note. If we tried to stop her, she would only sing louder. Which is why when I told my father I could sing, he made me prove it to him.” Freeman and her father often sang together and he played the piano for her. As a girl the young Yvette dreamed of becoming a singer.

While Freeman’s father was not against her going into entertainment, he insisted that she go to college. After earning her bachelor of arts degree from the University of Delaware in 1972, she headed for New York armed with a graphic design portfolio. Freeman was rejected by the agencies she approached and so she began to look seriously at acting. She was hired by a repertory company which performed in clubs and in prisons. Theater for the Forgotten took her out on the road, and at $250 or more per week, she felt she was making good money. She also managed to slip away to nightclubs to try to do a little singing.

A few years later Freeman left the repertory company and went on the road with various productions, including “The Wiz,” and “Ain’t Misbehavin’.” She also performed in the Broadway production of “Ain’t Misbehavin’ and traveled to Europe for its production there as well. After the play and a stint in Paris cabaret she returned to New York but decided it was time for a change and headed for Hollywood.

Freeman landed bit parts and guest-starring roles on a number of television shows, including Doctor, Doctor, Life Goes On, Sisters, and The John Larroquette

Show. Then in 1994 she got the role she is perhaps best known for, nurse Haleh Adams on the hit medical drama, ER. But she almost did not make it for the audition. Her aging car was barely running when she entered the studio parking lot. She rushed through the reading. “I could have cared less,” Freeman recalled in a Knight-Ridder/Tribune News Service story. “I wasn’t there....I was worried about getting home and finding another job that would pay to fix the Pinto,” she recalled. But she got the job. And later, when her Pinto finally quit for good, she also got her future husband, jazz pianist Lanny Hartley. Freeman’s car “blew up” in front of his house where she had gone to talk about collaborating on a project with him. Hartley was the musical director for singer and actress Della Reese. They were married in early 1996.

Ironically, Freeman got the role on ER just as she was thinking of leaving show business. She felt she was not making enough money to live comfortably, as she told Mode magazine. “Yes, I was working, but it just wasn’t enough. I was driving around in a battered Pinto and still living in Venice. It was a little much after a while,” she continued.

Freeman’s role on ER put her in front of millions in the highly acclaimed NBC show. In the show’s second season she appeared in 20 of the 22 episodes. And even though she was not one of the stars her face became well known. “When I was in theater, nobody knew who I was. Now I sign autographs in the supermarket. I feel blessed. ER put me on the block, “she said in a Knight-Ridder/Tribune News Service story.

Freeman has also had several movie roles, playing a nurse in the 1991 Dead Again, Samantha in Children of the Corn III in 1994, and a science teacher in the 1995 Angus, She also played in the 1992 television movie, “Just My Imagination.“

In 1997 Freeman also took on another role in a television series, Working. Her character, as the no-nonsense office manager Evelyn Smalley was at odds with her ER character, nurse Haleh Adams. “Most of the characters I’ve played, such as Haleh, are so warm and friendly. Evelyn, on the other hand, is pretty cold, “she was quoted as saying to girltech.com. In playing Evelyn Smalley, Freeman also had a more up-front role rather than one secondary to the stars as in ER. Freeman cut her appearances on ER in order to co-star in Working. She enjoyed playing Evelyn Smalley and admitted that it was fun, especially since she once worked as an office manager herself. Working only lasted two seasons.

Freeman’s childhood was filled with jazz and blues since her father was a professional pianist. One singer that made an impression on her was Dinah Washington, who had gained national prominence as the “Queen of the Blues. “Washington’s hit rhythm and blues and eventual crossover career ended in 1963 when at the age of 39 she died from alcohol and diet pill abuse. Washington was a full-figured woman and Freeman says she can identify with her. “Between the diets and the pills, Dinah was obsessed with trying to be skinny. . . .for a woman like myself who has tried every diet in the book, I can relate to her issues, “Freeman told Mode magazine.

She could also relate to her music, and in 1995 she “became“Dinah Washington on stage, acting out her life and singing her songs. The off-Broadway show, Dinah Was became a hit and won critical acclaim. Peter Marks of the New York Times said, “Freeman is excellent as Washington, a whirlwind lustily sucking up huge gulps of life. . . .vivacious, and charismatic. “Freeman did not stop there. She also recorded a CD of Dinah Washington songs, A Tribute to Dinah Washington. She and her husband, Lanny, also an arranger, co-produced it, releasing it in 1999. Freeman’s admiration of Dinah Washington was as much for her business skills as her musical talent. “She was a businesswoman, had her own company and produced other singers, “Freeman was quoted as saying in the Akron Beacon Journal. “That was something unheard of in the fifties for a woman—and she was a black woman, “she continued. Freeman won an OBIE award for her role as Dinah Washington. The OBIE awards are given each year for off-Broadway work in several categories—it is off-Broadway’s highest honor and was created to encourage and acknowledge talent.

In 1999 Freeman was accepted into an American Film Institute program which works to develop more female directors. She was one of eight women in the program and after finishing her film, The Blessing Way, she plans to submit it to the Sundance Film Festival.

Still branching out in her art, Freeman has been working on a children’s book with her sister. Another place she wants to focus her energies and talent is in diversifying the television industry. The networks had been criticized for not having more black actors in their lineups. She was quoted as saying in the Akron Beacon Journal, “I know I have a place, I have something to do. And it’s not only me; every woman, every ethnic type, needs to come up with product for Hollywood....It’s going to come from us. We’ve got to be ready to produce projects, give the powers that be ideas. “Her many talents assure Yvette Freeman a place in the spotlight for many years to come.