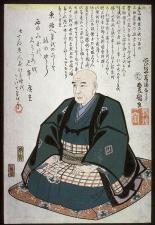 The Japanese painter and printmaker Ando Hiroshige (1797-1858) is considered one of the six great masters of the Ukiyo-e school. He is most famous for his landscape prints, which render typically Japanese landscapes in their different moods in a very poetic manner.

Working during the closing decades of the Edo period, Hiroshige represents the last flowering of the Ukiyo-e school. After his death, the designs of the prints became ever more vulgar, the printing careless, and the colors garish. In fact, a few years before Hiroshige's death, Commodore Perry arrived with his famous "black ships" to break Japan's centuries-old seclusion, and the end of traditional Japanese art and culture was in sight.

Hiroshige was the son of a fire brigade chief in Edo (modern Tokyo). At the age of 14, he became a pupil of Utagawa Toyohiro, a well-known printmaker, and he also studied traditional Japanese painting. Hiroshige's early work, which consisted of actor and courtesan prints, was neither original nor particularly distinguished, and it was only when he turned to landscapes, after Hokusai's great success with his Thirty-six Views of Mt. Fuji, that Hiroshige found his own unique style and achieved a fame even greater than that of Hokusai. In 1831 Hiroshige produced his first important work, a set of 10 famous views of Edo. The next year he executed Fifty-three Stages of the Tokaido Road, which established him as the leading printmaker of the day. From that time on he continued to make a huge number of prints until his death.

The subject of virtually all of Hiroshige's mature work was the Japanese landscape, which he portrayed in a lyrical manner with an emphasis upon the misty atmosphere, the picturesque old pines, the sea with its fishing boats, and the green or snow-covered mountains. No other Japanese artist has succeeded in expressing so well the feeling and appearance of Japan, nor has anyone portrayed it with more subtlety and poetry. Hiroshige depicted the landscapes, as well as the people traveling about the country or performing their daily tasks, with such care that they serve as a record of Japanese life of the mid-19th century. Whether he was portraying the ancient capital of Kyoto or the new capital of Edo, the beauty of Lake Biwa, or the Tokaido or Kiso Kaido roads, the artist never tired of representing the varied aspects of his native land.

Of all the many sets of prints produced by Hiroshige, whose total output is estimated at more than 5, 000, the finest is without question the Fifty-three Stages of the Tokaido Road, published in 1833 and reprinted innumerable times ever since. This highway, which linked Edo with Kyoto, was the main road of Japan and was used by officials, businessmen, pilgrims, and sightseers who enjoyed its magnificent scenery, for it was flanked by mountains on the north and the sea on the south. Hiroshige himself had traveled it as a member of an official party of the shogunate which had gone to Kyoto in 1832 to present the Emperor with a white horse. During this trip Hiroshige made many sketches, and upon his return he started the designs representing the wayside stations along the road. To the 53 stations he added a print showing the starting point of the journey at the Nihonbashi in Edo and another for the final destination at the Sanjo Ohashi in Kyoto.

Another set which is particularly fine is the Eight Views of Lake Biwa (1834), which gives expression to Hiroshige's sensitive feeling for the moods of nature during different seasons and under various atmospheric conditions. It is the kind of print which was so much admired by such impressionists as Claude Monet and James McNeill Whistler.

Of the works of Hiroshige's later period, by far the most outstanding is Hundred Views of Edo, dating between 1856 and 1858. The quality of this series is uneven, as much of his later work is, but the finest, such as Rain Storm on the Ohashi Bridge and Kinryuzan Temple in Asakusa, are among his most remarkable prints. Next to his landscapes, his best work is his bird and flower prints, called Kacho in Japan.

Johann Gutenberg , The German inventor and printer Johann Gutenberg (ca. 1398-1468) was the inventor of movable-type mechanical printing in Europe. Johann Gutenberg was… Suzuki Harunobu , Suzuki Harunobu Suzuki Harunobu (ca. 1725-1770) was one of the six great masters of the Japanese wood-block print and was responsible for inventing t… Print , print / print/ • v. [tr.] (often be printed) 1. produce (books, newspapers, magazines, etc.), esp. in large quantities, by a mechanical process invol… Japanese Americans , JAPANESE AMERICANS have contributed significantly to the political strength, economic development, and social diversity of the United States. Like al… Printing , In the Middle Ages, books were laboriously copied by hand. They were rare, carefully preserved in monasteries and private collections, and too expens… Japanese Art , Japanese art, works of art created in the islands that make up the nation of Japan. Early Works The earliest art of Japan, probably dating from the 3…