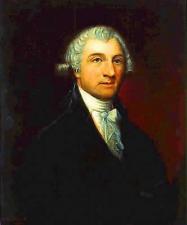 oxford
views updated
Thornton, William (1759–1828). Born in the British West Indies, he studied medicine at Edinburgh and became an American citizen in 1788. He designed the Library Company Building, Philadelphia, PA (1789–90—destroyed), based on a plate in volume 2 of Abraham Swan's (fl.1745–c.1770) Collection of Designs in Architecture (1757), and in 1792 prepared drawings for the competition to design the US Capitol in Washington, DC, loosely based on plates in Colen Campbell's Vitruvius Britannicus (1715–25). His second design, drawn up (rather unsportingly) after he had been able to peruse some of the entries and submitted after the deadline, was accepted in 1793, but, having major flaws as a realizable proposition, was revised by Hallet, who changed Thorn-ton's plans to conform more to his own ideas. Thornton again produced a third design in 1795 when Hadfield was dismissed as supervising architect, and it is that which forms the basis of the final version, with the central pedimented portico and rather French Louis Quinze elevations (although the Capitol went through several further transformations in the course of its history). He designed the Octagon, a town-house in Washington (1797–1800—which, like his Capitol designs, demonstrates his fascination for elliptical and circular interior spaces), and also a house at Tudor Place, Georgetown, Washington (c.1805–10, probably his best work, perhaps influenced by a design by Soane in New Vitruvius Britannicus (1802–3) ). He also designed Pavilion VII, University of Virginia, Charlottesville (1817–21). See also bulfinch, hoban, latrobe, and walter.