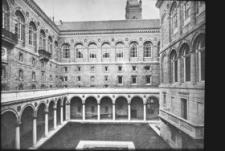 Charles Follen McKim (1847-1909), American architect, was the founding partner in the firm of McKim, Mead & White, which set the standard for architectural taste in the United States between 1879 and 1909.

Charles Follen McKim was born at Isabella Furnace, Pa., on Aug. 24, 1847. His father was a fervent abolitionist and his mother was a Quaker. After attending the Weld School in New Jersey and Philadelphia public schools for 3 years, McKim entered Harvard's Scientific School in 1866. Finding his studies difficult and disagreeable, he tried instead the architectural course in Paris at the École des Beaux-Arts and spent 3 happy years there (1867-1870).

On his return to America, McKim began working in the architectural office of Gambrill and Richardson in New York City. Here McKim learned from Henry Hobson Richardson that architecture was a "fine art" and should be practiced as such. In 1872 McKim opened his own office in New York. His friend William Rutherford Mead soon joined him, and then a partnership was formed in 1878 with William B. Bigelow. Bigelow resigned and was replaced by the flamboyant Stanford White in 1879.

In 1874 McKim had married Annie Bigelow, William's sister; they were divorced in 1878. They had one daughter. In 1885 he married Julia Amory Appleton, who had commissioned him to build her summer home at Stockbridge, Mass. She died in 1887.

For McKim the first realization that classical architectural forms and ornament were finer than any other came during a sketching trip through New England in 1877 with Bigelow and White. They visited Salem, Marblehead, and Newburyport and made measured drawings of the best colonial houses.

As a summer resident of Newport, R. I., McKim was well acquainted with wealthy socialites, and many commissions came from these friends. The Newport Casino (1881) was one of his earliest buildings in the resort community. The design was appropriately informal, gay, and picturesque; its broad verandas easily coped with the crowds.

McKim and his partners designed the Villard houses (1882), which were attached to form a three-sided court, on Madison Avenue in New York City, in a style adapted from the Italian Renaissance. This veritable palace favorably impressed his client's friends and led them to choose McKim's firm to design many other buildings.

The complicated Boston Public Library (1887-1898), though generally Italianate, derives in part from Henri Labrouste's Bibliothèque Ste-Geneviève in Paris—particularly the high, arched windows that light the reading room. Many of McKim's artist friends, such as Augustus Saint-Gaudens, John LaFarge, and James McNeill Whistler, contributed their work to make the library a splendid museum of contemporary art.

McKim's guiding influence is visible in the correctly proportioned Johnson Gate (1889) at Harvard University; the Algonquin Club (1889) and Symphony Hall (1892) in Boston; the important Columbia University Library (1893-1896); the American Academy (1895-1904) in Rome; and the University Club (1896-1899), the Pierpont Morgan Library (1902), and the vast Pennsylvania Station (1902-1910; demolished) in New York City. McKim also represented the firm on the building commission for the Chicago World's Columbian Exposition (1890-1893) and designed the classical Agricultural Building.

McKim was a highly persuasive personality. He knew with confidence what was esthetically right; he knew how to please wealthy clients; and he designed with dignity and sobriety, never giving way to frills and picturesqueness for their own sake. He received many honors, including the coveted Royal Institute of British Architects King's Medal (1903), and honorary degrees from Harvard University, Bowdoin College, Columbia University, and the University of Pennsylvania. He was elected academician of the National Academy of Design in 1907 and was presented the Gold Medal of the American Institute of Architects in 1909. He died in St. James, Long Island, N. Y., on Sept. 14, 1909.

There is no definitive book on the firm of McKim, Mead & White, although four large volumes of plans and photographs were published. The best work on McKim is Charles Moore, The Life and Times of Charles Follen McKim (1929). Another work worth consulting is Alfred Hoyt Granger, Charles Follen McKim: A Study of His Life and Work (1913). □

Marcel Breuer , The Hungarian-born American architect Marcel Breuer (1902-1981) was among the most influential architects and teachers of the 20th century. From his… I M Pei , Pei, I. M. I. M. Pei Canton (now Guangzhou), China Architect famous for designing museums and other structures "At one level my goal is simply to giv… Stanford White , The American architect Stanford White (1853-1906), a partner in the architectural firm of McKim, Mead & White, was noted for his decorative inventive… Ada Louise Huxtable , Huxtable, Ada Louise Ada Louise Huxtable (born 1921), chief architecture critic of the New York Times from 1963 to 1982, has been a consistent and sh… Rem Koolhaas , Koolhaas, Rem Architect Rem Koolhaas is considered by his many followers to be the coolest, hippest, and most cutting-edge architect on the planet. B… Louis Henry Sullivan , Louis Henry Sullivan (1856–1924) inspired design and construction ideas for the most significant twentieth century American buildings, and for that h…