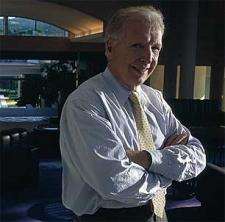 Arthur Charles Erickson (born 1924), Canadian architect, became the most internationally noted figure in Canadian architectural history. Sensitive to the expression of site and the response of buildings to environment, he was also recognized as a skillful landscape architect.

Arthur Erickson's early education in art was inspired by the spectacular setting of the British Columbia landscape and by the intensely art-conscious social milieu into which he was born. His parents were of the generation of "pioneers" in the city of Vancouver (which was chartered in 1886 and experienced its first large demographic and building boom in 1912) who were determined to foster the arts in their community. His mother encouraged her two sons to pursue an interest in the arts. Among Erickson's other inspirers and mentors were Canadian artists who had settled in Vancouver, such as Lauren Harris and B. C. Binding, and Victoria-born Emily Car.

Erickson credits these mentors with having taught him an appreciation of the dual relationship between art and nature. Twinned with his aesthetic education was a boyhood fascination with nature—he brought home countless plant samples and small animals, and was allowed to paint on his bedroom wall a giant aquatic mural. His drawing talents were so developed that by the age of fourteen Harris had arranged a show of the youth's work at the Vancouver Art Gallery.

Awareness of the larger intellectual world of architecture and design philosophies came from contacts with the Austrian-American architect Richard Neutra and especially Gordon Webber, a student and teacher at the Chicago Institute of Design who had inherited the Bauhaus ideals of George Keeps, Lasso Moholy-Nagy, and Serge Chermayeff. Erickson received his formal training in architecture at Montreal's McGill University, and graduated with honors and prizes.

The story of Erickson's formation as an architect is not complete without mention of his love of travel, combined with his training for keen observation and his profound respect for other cultures. After McGill, he received a one-year travel-study grant, which he stretched into two and a half years, "by frugal living and a bit of vagrancy," he recalled in The Architecture of Arthur Erickson. Following the path of civilization from its Middle East origins and moving west-and northward across Europe, Erickson gained an appreciation of architectural history and a building's relationship to its physical environment. Combined with later journeys taken though Asia, Africa, and South America, Erickson gained a rich repertoire of ideas and inspirations regarding spiritual and spatial forms.

In 1955, Erickson began teaching at the University of Oregon, and the following year returned to Canada after taking a position with the School of Architecture of the University of British Columbia. Though he left the school in 1964, his deep influence on the architectural philosophy of the curriculum was felt for many years after his departure.

The first commission to bring him wide international recognition was the building of Simon Framer University in Burnaby, British Columbia (1965), designed in cooperation with Geoffrey Massey. They built it on the "academic village" model, and its innovative concrete shapes follow a rhythm that echoes the mountainous landscape. Erickson's creation of the Canada Pavilion (also in partnership with Massey) at the Osaka World's Fair of 1970 was described as "magical" and was cited as the best building of that fair. Others among his most acclaimed works are the Museum of Anthropology (1972) on the University of British Columbia campus and the Robin Square Civic Center (1973) in downtown Vancouver. He and Massey carried on their own joint firm from 1963 to 1972, and Erickson founded his own Vancouver-based practice in 1972.

Many of Erickson's residential designs received much attention. These include the Filbert House in Commix, British Columbia (1958); the two Smith houses (1955 and 1964), the Graham House (1962), and the Epoch house (1974), all in West Vancouver, British Columbia, and the Bagel Write house (1977) in Seattle, Washington.

All of these structures exhibit Erickson's adherence to the so-called modernist tradition of the 20th century, a philosophy which emphasizes truth in expression of materials, function, and structure in architecture. Building materials which do not require the protection of paint are left to reveal their intrinsic colors and to weather in a natural way. Interior spaces are immediately discernible or are implied on the exterior, and the transition between exterior and interior is consciously de-emphasized, resulting in an intimate interdependence of building and landscape. A typical Erickson building will exhibit a minimum variety of materials. Thus the Epoch house presents to the eye little but concrete and glass, and the Osaka pavilion appeared to be ephemerally constructed of nothing but timber and mirrors.

In the composition of his buildings and their landscapes another Erickson "signature" occurs in the repeated use of the "slipped plane." This is a formal device, refined by Mies van der Rohe, in which horizontal and often vertical planes are juxtaposed along a slightly broken line which makes them appear to be moving by one another in parallax and which induces movement through a gently shifting and meandering sequence of spaces rather than a rigidly axial one.

Erickson also received much inspiration for his forms from the cultures of Shinto Japan and the Islamic Middle East. Like Frank Lloyd Wright, Erickson was early impressed with the Japanese bittersweet, rather fatalistic acceptance of nature as an inescapable force to which human beings and human structures must submit and which they may never overpower. Many of his landscape designs, especially his own garden in Vancouver, reflect this view of accepting nature as unalterable.

Erickson was also attracted by the marriage of simple stretches of opaque walls combined with complex geometrical details characteristic of Moslem architecture. This was most obviously expressed in his Man and His World Pavilion in the Montreal Exposition of 1967, in the Sikh Temple in Vancouver (1969), and in the project for a science museum in Saudi Arabia (1982). Involvement in commissions such as these, as well as large-scale urban projects for Los Angeles, Kuala Lumpur, and countries of the Middle East, led Erickson into forms more intricate and perhaps more picturesque than was previously typical in his work.

By the late 1970s Erickson's firm had expanded with offices in Toronto, Los Angeles, and Saudi Arabia. This era of his career was noted for several other notable projects, including Toronto's Roy Thomson Hall (1982). In southern California, his most noteworthy projects include the San Diego Convention Center (1981), Fresno City Hall, and Los Angeles's largest downtown real estate development, California Plaza. His reputation was further enhanced when he was chosen to design the Canadian Chancery (Embassy) in Washington, D.C. (1989). In 1985 the American Institute of Architects awarded Erickson its prized Gold Medal.

Yet Erickson often encountered problems in joining his architectural visions to concrete business concerns. By the late 1980s, he began to experience difficulty in obtaining financing from lending institutions for his projects; in 1988 several prominent Canadians pooled their resources and set up a capital group for him. The following year he closed his Toronto office, citing a recession that was dampening the most ambitious of creative endeavors across North America. His Los Angeles office ran into financial troubles in time as well. He was forced to close it in 1991; there were no new commissions and he could no longer pay the $10,000-a-month rent on the space.

The recession continued to stymie Erickson. By 1992 his Vancouver office had merged into another architectural firm in the city, he filed for bankruptcy in California and declared personal bankruptcy in British Columbia. He continues to work as an architect in Vancouver.

Additional information on Erickson can be found in the following: The Architecture of Arthur Erickson, written by Erickson (Montreal, 1975), contains insights into the architect's philosophy together with excellent illustrations with plans of most of the important works completed and in progress. Seven Stones, by Edith Uglier (1981) presents an anecdotal biography relating the architect's life to his work. Canadian Architecture, by Carol Moore Dee (Toronto, 1971), includes an introduction by Erickson and photoessays on Simon Framer University, the second Gordon Smith house, and the Macmillan Blooded building; and By Their Own Design, edited by Abby Suckle (1980) includes a section on Erickson. There is an essay on him in Contemporary Architects (1993). Time magazine, June 4, 1979, carried a cover article on Erickson; and a profile of Erickson appeared in the New Yorker magazine, June 4, 1979. His later career is chornicled in Maclean's (July 22, 1991) and an interview with him in Canadian Architect (April 1992).

oxford
views updated
Erickson, Arthur Charles (1924– ). Canadian architect. He gained international recognition with his plan and central covered mall for the Simon Fraser University, Burnaby, Vancouver (1963–5), designed with Geoffrey Massey (1924– ), and influenced by the work of Le Corbusier, Kahn, and Rudolph. Erickson's expression of columnar and trabeated architecture is best seen at the Smith House, West Vancouver (1965), and the Museum of Anthropology, University of B.C. (1973–6). His Provincial Government Offices and Court House complex, Robson Square, Vancouver (1973–9), is a formal essay in urban design, imaginatively landscaped with trees and water.

The Canadian Chancery, Washington, DC (1983–9), demonstrates a response to aspects of Washington's Classicism, with its huge courtyard and rotunda. In 2002–3 his Museum of Glass, Tacoma, WA, was built (with Thomas Cook Reed Reinvald Architects).