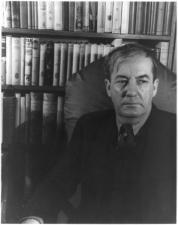 The works of the American writer Sherwood Anderson (1876-1941) are graced by a psychological complexity absent from earlier American fiction. His stories stress character and mood, and his style is laconic and colloquial.

Sherwood Anderson was born on Sept. 13, 1876, in Camden, Ohio, the third of seven children. His father was an easygoing, improvident man whose itinerant habits resulted in spotty educations for his children. Sherwood had no formal education after the age of 14, although he did attend Wittenberg College for a short time.

Anderson had a belated writing career. He served in Cuba during the Spanish-American War, then began a successful business career in advertising. But it was while owning and managing a paint factory in Elyria, Ohio, that he began, about 1908, to write stories and novels.

The turning point in Anderson's life came in 1912, when, suffering from nervous exhaustion and amnesia, he suddenly deserted his factory. The next year, with his brother Karl, a well-known painter, he went to Chicago and fell in with the "Chicago group"—Theodore Dreiser, Carl Sandburg, and others—through whose efforts his earliest work was published. Windy McPherson's Son (1916), his first novel, uses his father as the prototype for Windy, a drifter and teller of tall tales.

A second novel, Marching Men (1917), and a collection of prose poems, American Chants (1918), followed. Then Anderson published his masterpiece, Winesburg, Ohio (1919), a series of fictionalized sketches of "grotesques," his term for people defeated by false dreams, people whose illusions have left them vulnerable to profound hurts from which they never recover. Perhaps the best sketch is "Hands," the story of Wing Biddlebaum, a mournful eccentric who recounts his traumatic experience: he was once a loving small-town schoolteacher, but narrow-minded townspeople, acting on nothing more than a child's agitated and false report, branded Wing as a sexual deviant, drove him from the town, and almost lynched him.

The unity of Winesburg, Ohio, established by the presence of a perceptive observer (George Willard, a young reporter) and by the pervasive theme of human frustration, has led some critics to regard the book as a novel, a view taken by Anderson himself. Regardless of its genre, it is a significant expression of a theme associated with D.H. Lawrence—the psychological damage wrought by an industrial civilization—rendered with extraordinary compassion.

Despite his late start, Anderson was a prolific writer. Poor White (1920), a novel, was followed by The Triumph of the Egg (1921), a collection of stories, the most notable of which is "The Egg," a haunting symbolist tale of a man who has violated his nature by accommodating himself to his wife's ambitions. Many Marriages (1923), a novel, was followed by Horses and Men (1923), a collection of stories which includes "I'm a Fool," a superb, sympathetic treatment of the theme of American bravado.

Anderson's biggest money-maker, however, was the relatively weak novel Dark Laughter (1925), which attempts to measure the white man's crippling anxiety against the black man's tuneful laughter but succeeds only in contributing albeit unwittingly, to racial stereotypes.

Anderson was a heavyset Midwesterner with a leonine head and masses of wavy hair. He was comfortable only in casual clothes. An eccentric man, he once, in the 1920s, bought and edited two rival weekly newspapers in Marion, Va., one Democratic and one Republican. He was married four times; he had two sons and one daughter by his first wife.

Having deserted Ohio for Chicago, he traveled extensively in Europe. Although he continued to write until his death, his later work received scant attention. He died of peritonitis at Colon, Panama, on March 8, 1941.

A business man turned writer, Sherwood Anderson (September 13, 1876–March 8 1941) was called by H. L. Mencken, "America's most distinctive novelist." Anderson grew up in a series of Ohio towns, the second of seven children of an unsuccessful harness maker and itinerant house painter and a long-suffering mother. His spotty education ended when at age twenty-three he graduated from Wittenberg Academy. He sought his fortune in advertising and then the mail-order business, and found it with an Ohio company that manufactured roof repair materials. By 1907 he was its president.

In fiction that he wrote at night, Anderson sought to transcend the world in which he worked by day. The worlds clashed in 1912 when he walked out of his office in a fugue state and wandered for days, ending up in a Cleveland hospital, not knowing who he was. When he recovered he dedicated his life to writing. His midlife crisis became legendary. Anderson was heralded as proof that America was growing out of its infatuation with material prosperity.

Anderson wrote seven novels, several autobiographies and plays, and innumerable prose pieces. He was at his best in his four volumes of short stories, the most famous of which is Winesburg, Ohio (1919). In the late 1920s he bought and edited two rival weeklies in southwestern Virginia.

It was there that he met Eleanor Copenhaver, a social worker in the Industrial Division of the

[Image not available for copyright reasons]

YWCA. He accompanied her in her travels to textile and steel mills, union halls, and workers' homes throughout the South. In 1933, Eleanor joined him in a happy marriage (his fourth) that lasted until his death. Although drawn to radical causes and meetings, he was too much the artist to toe any party line; instead he wrote about workers' conditions and the governmental and company policies that improved or worsened them. In Perhaps Women (1931) Anderson glossed his accounts of the dislocations southern workers were experiencing with the theory that men were being emasculated by their machines and needed to turn to women for their salvation. In Puzzled America (1935) he was content to let those workers, the unemployed, preachers, and the down-and-out speak for themselves. He discovered no prospect of revolution, no danger of fascism, but instead "a hunger for belief," a determination to find and follow the leadership "we are likely to get out of democracy." The result, according to Irving Howe, was "one of the few books that convey a sense of what it meant to live in depression America." In the years that followed, he wrote Kit Brandon (1936), a novel about a female bootlegger, and several plays. He died en route to South America, where he had hoped to learn and write about communal life in a version of his famous Winesburg.

Sutton, William A. The Road to Winesburg: A Mosaic of the Imaginative Life of Sherwood Anderson. 1972.

Encyclopedia of the Great Depression

Ernest Hemingway , Ernest Hemingway is praised as one of the greatest American writers of the twentieth century. With an understated prose style, his fiction features a… Novel , novel, in modern literary usage, a sustained work of prose fiction a volume or more in length. It is distinguished from the short story and the ficti… Charles Waddell Chesnutt , Chesnutt, Charles W. 1858–1932 Charles W. Chesnutt 1858–1932 Author A chronicler in fiction of history’s darkest days for blacks in the South after t… Charles Dickens , The English author Charles John Huffam Dickens (1812-1870) was, and probably still is, the most widely read Victorian novelist. He is now appreciated… Franz Kafka , Kafka, Franz DIED: 1924, Vienna, Austria NATIONALITY: Czech MAJOR WORKS: The Metamorphosis (1915) The Country Doctor: A Collection of Fourteen Short… A S Byatt , Byatt, A. S. A. S. Byatt BORN: 1936, Sheffield, England NATIONALITY: British GENRE: Novels, poetry, essays, short stories MAJOR WORKS: Iris Murdoch:…