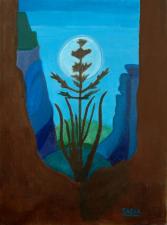 Joseph Stella was born in Muro Lucano, a mountain village close to Naples. When he was 19, he went to America to study medicine and pharmacology. In 1897 he began to paint and enrolled as a full-time student at the Art Students League and then at the New York School of Art, studying under William Merritt Chase. Stella's earliest painting emulates the manner of Chase, who admired Diego Velázquez, Édouard Manet, and Frans Hals and interpreted American subjects with breadth of handling and richness of palette. Stella made several drawings of immigrants and miners for the magazines Outlook and Survey.

By 1910 Stella was back in Europe. He spent about a year in Italy and then went to Paris, where he met Henri Matisse, Pablo Picasso, and a number of the Italian futurists, including Umberto Boccioni, Carlo Carrà, and Gino Severini. Stella's enthusiasm for their art was not immediately translated into his own work, but after he returned to the United States late in 1912 he began his first large futurist painting, Battle of Lights, Coney Island. In this picture, forms are fractured and faceted to form a phantasmagoria of fragmented amusement-park architecture, disembodied by light and bright colors. It owes much to Severini in its conception. When the painting was exhibited in New York City, knowing art patrons admired it, but the general reception was negative.

Stella refined and applied his futurist approach to the American industrial scene, glorifying it by lending to it a precisionist character not unlike that of Charles Sheeler and Niles Spencer.

In 1920 Stella executed his first "Brooklyn Bridge" painting. He was to return to the theme as late as 1939 in his Brooklyn Bridge: Variations on an Old Theme. In these two paintings the scintillating and iridescent light patterns and hyperbolic sweep of steel are fixed by a taut, overriding symmetrical composition.

Stella became an American citizen in 1923. He made numerous trips abroad during the 1920s and 1930s. Visits to North Africa and Barbados inspired him to depict the spirit of a tropical environment in lush color and strong, centrally located forms. He also composed small, delicate, and intimate collages somewhat in the spirit of Paul Klee and Arthur Dove. Stella's development as an artist was marked by impulsiveness and surprising shifts and turns. He died in New York City on Nov. 5, 1946.

Irma B. Jaffe, Joseph Stella (1970), is the most complete study of the artist. Recommended for general background are Milton W. Brown, American Painting: From the Armory Show to the Depression (1955); and Daniel M. Mendelowitz, A History of American Art (rev. ed. 1970).

Frank Kupka , Frantisek Kupka (1871-1957) was a Czech painter and illustrator who lived most of his life in Paris. He was one of the first artists to paint abstrac… Horace Pippin , Pippin, Horace 1888–1946 Painter The most celebrated African American painter of his time and one of the greatest of any period, Horace Pippin had an… Romare Bearden , Bearden, Romare 1912–1988 Artist A master of technique best known for his collage and photomontage compositions, esteemed artist Romare Bearden consi… Jacob Lawrence , Lawrence, Jacob 1917–2000 Artist Jacob Lawrence was America’s most honored black painter. He received the kind of recognition most artists only dream… William Sidney Mount , William Sidney Mount (1807-1868), one of America's first and best anecdotal painters, portrayed rural life on Long Island. William Sidney Mount was b… Painting , painting, direct application of pigment to a surface to produce by tones of color or of light and dark some representation or decorative arrangement…