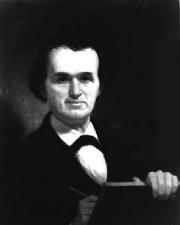 The American painter George Caleb Bingham (1811-1879) depicted life in Missouri around the middle of the 19th century. His best-known subjects are the masculine world of river boatmen and rural politics.

Although George Caleb Bingham is known today for his well-composed, candid genre paintings, he also painted portraits and landscapes. In fact, in his 40 years of work he created fewer than 50 narrative paintings, while his portraits probably total more than a thousand. Most of his genre studies were painted during a span of only 10 years. He spent most of his mature life in politics and portrait painting; his involvement in Missouri politics led to many portrait commissions. Thus, during his lifetime he was best known as a politician and portrait painter, rather than as the master of genre he is considered today.

Bingham was born March 20, 1811, in rural Virginia. Eight years later his family moved to Franklin, Mo., where his father operated an inn for 3 years before his death. When Bingham was 16, he was apprenticed to a cabinetmaker in the river town of Boonville, Mo. Soon after, determined to be an artist, he took up sign painting and about 1833 began painting portraits. He was largely a self-taught artist.

Self-portrait (1835) is typical of his early portraiture. The expression is strong, the handling stiff. In the spring of 1836, he married Sarah Elizabeth Hutchison and in the following winter went to Natchez, Miss., to do portraiture.

In 1838 while on a 3-month visit to Philadelphia (where he studied at the Pennsylvania Academy), he made his first genre painting. Titled Western Boatman Ashore, it has been lost, like many of his paintings. His choice of western subjects reflected a deep interest in his fellow Missourians, a concern that also led him to take an active part in regional politics. During the next 7 years he was busy painting both portraits and political banners. It was not until 1845 that he took up genre painting in earnest.

Among his earliest and finest genre paintings is Fur Traders Descending the Missouri (1845), which depicts a man and a boy in a canoe in early morning. At the St. Louis Mercantile Library are detailed pencil and graywash drawings of these 2 figures as well as studies of 115 other figures that appear in his later works. Except for the addition of color, the figures in his finished paintings are identical with these wash drawings, so they were probably traced onto the canvas.

Most of Bingham's finest narrative paintings were done between 1845 and 1856. Occasionally he repeated the same subject either exactly, as in the case of County Election, or with slight variations, as in the two versions of the Jolly Flatboatmen. Bingham's canvases of life on the Mississippi and Missouri rivers are as revealing, humorous, and lyrical as Mark Twain's later writing on the subject. Most of the men in these paintings are idle, and the serenity of such river subjects is in strong contrast to his riotous political scenes. As an active politician, Bingham knew his new subjects well. His three major political paintings, County Election (1852), Stump Speaking (1854), and Verdict of the People (1855), are packed with men talking or listening, drinking or drunk.

Binham's finest historical work is the Emigration of Daniel Boone (1851-1852), in which a youthful Bonne is shown leading pioneers through Cumberland Gap. This painting, as well as six of his others, was reproduced in contemporary prints. Though during his lifetime his work was seen widely through these reproductions, Bingham himself was not well know outside Missouri.

While engaged in painting these scenes of western life, Bingham traveled a great deal between Missouri and the East to take part in Whig activities and paint portraits. In 1848 he was elected to the Missouri State Legislature. In the same year his first wife died, and a year later he remarried.

In 1856 Bingham made his first trip to Europe, where he painted life-size, commissioned portraits of Washington and Jefferson; he also completed the Jolly Flatboatmen in Port in 1857, his last, most skillful and complex painting of this subject. He returned to St. Louis but, commissioned to paint a portrait of Alexander von Humboldt, returned in 1859 to Düsseldorf, Germany.

During the Civil War, Bingham was a captain in the Volunteer Reserve Corps; he was state treasurer from 1862 to 1865. In 1865 he began his last major canvas, Order No. 11, a painting provoked by the injustice of a military order in 1863 which had forced many Missourians to leave homes that were then sacked and destroyed. Though effective as propaganda, this canvas lacks the clarity and vitality of his earlier figure paintings.

Bingham spent his last years in politics and portrait painting. In 1877 he was appointed professor of art at the University of Missouri. He died at Kansas City, Mo., on July 7, 1879. He was survived by his third wife, a son, and a daughter.