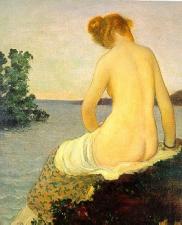 American painter Arthur Bowen Davies (1862-1928) introduced a contemporary quality in a basically romantic style and was a pioneer in bringing American art into the mainstream of progressive Western painting.

Arthur B. Davies was born in Utica, N.Y., on Sept. 26, 1862. He was sketching and painting scenes of the Mohawk Valley before he was 16, when his family moved to Chicago. He studied at the Art Institute there, worked for the board of trade, and went on an engineering expedition to Mexico. In 1887 he went to New York City and studied at the Art Students League, where Robert Henri and George Luks became his friends. Davies's earliest professional work (1888-1891) was magazine illustration. He married in 1890 and moved to a farm near Congers, N.Y.; soon afterward he competed unsuccessfully for the mural decorations of the Appellate Court in New York City. In 1894 the New York art dealer William Macbeth provided him with a studio over his gallery, gave him a one-man show, and introduced him to industrialist Benjamin Altman, who provided funds for his first trip abroad. In Europe he was impressed by the Venetians and by Delacroix, Puvis de Chavannes, and Whistler.

By 1900 Davies had found his characteristic theme: the female nude in a landscape setting, romantic, nostalgic, frequently with a mysterious ritualistic quality. The figures, small in scale, are often arranged in a friezelike procession against dark and forbidding backgrounds. The mood is poetic, with a peculiarly personal symbolism that is suggested by mythological themes or by obscure symbolic titles. A new grandeur was introduced in his work as the result of a trip to California in 1905 during which he made studies of mountains.

Davies was one of "The Eight" whose 1908 exhibition at the Macbeth Gallery challenged the authority and conservatism of the National Academy of Design. Five of the exhibiting artists stressed urban realism in subject matter; Davies and Maurice Prendergast established notes of fantasy and charm which were wholly personal. Davies was a master of many media—oil, watercolor, pastel, lithograph, etching, sculpture, murals, and tapestry designs.

From 1912 to 1914 Davies was president of the Society of Independent Artists, which had been formed to organize the Armory Show of 1913. This celebrated exhibition first introduced American artists and the American public to the European pioneers of 20th-century style. Davies's work for a period reflected a new cubist influence but returned eventually to the idyllic fantasies that were his natural language.

Though Davies was a habitual recluse and worked in considerable secrecy, he attracted devoted admirers and was generous in his admiration of progressive artists. During the 1920s he executed a series of murals and designed tapestries. He also became obsessed with the act of inhalation and believed that the character and quality of Greek art was due to the fact that it represented figures consciously controlling their breathing. It has even been said that his personal experiments in breathing led to his heart attack in 1923. After that he went again to Europe, where he painted a series of romantic landscapes in northern Italy. He died in Florence, alone in his studio, on Oct. 24, 1928.

There is no comprehensive study of Davies. Royal Cortissoz, Arthur B. Davies (1931), is a brief but useful picture book. Davies's important role in formation of the Armory Show is documented in Milton W. Brown, The Story of the Armory Show (1963). There are interesting personal sidelights in Bennard B. Perlman, The Immortal Eight: American Painting from Eakins to the Armory Show, 1870-1913 (1962).