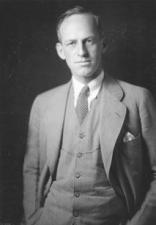 Joseph Raymond McCarthy was a U.S. senator who during the early 1950s conducted a highly controversial campaign against supposed Communist infiltration of the U.S. government. His accusations and methods of interrogation of witnesses came to be called "McCarthyism," a term that remains a part of the U.S. political vocabulary. Though he was ultimately censured for his activities by the Senate, McCarthy was, between 1950 and 1954, the most powerful voice of anti-communism in the United States.

McCarthy was born November 14, 1908, in Grand Chute, Wisconsin. He graduated from Marquette University in 1935 with a bachelor of laws degree. He practiced law in Wisconsin until 1939, when he was elected a circuit court judge. During world war ii, McCarthy served in the Marine Corps as a tailgunner. He progressed to the rank of captain and was awarded several commendations for his military achievements.

McCarthy used his wartime record as "Tailgunner Joe" to help upset Republican Senator robert m. lafollette Jr., in the 1946 Wisconsin primary election. McCarthy was elected to the Senate in 1946 and reelected in 1952.

During his first three years in office, McCarthy was an undistinguished and relatively unknown senator. He catapulted to public attention, however, after giving a speech in Wheeling, West Virginia, in February 1950. In the speech, McCarthy charged that 205 Communists had

infiltrated the state department. He claimed that Communist subversion had led to the fall of China to the Communists in October 1949. A Senate investigating committee ordered McCarthy to produce evidence of his accusations, but he was unable to produce the names of any Communists.

"The fate of the world rests with the clash between the atheism of Moscow and the Christian spirit throughout other parts of the world."
—Joe Mccarthy

Despite this failure to produce evidence, McCarthy escalated his anti-Communist crusade. He accused Democratic President harry s. truman's administration of harboring Communists and of failing to stop Communist aggression. His accusations struck a chord with many U.S. citizens,

who were fearful of the growth of Communism and the menace of the Soviet Union as well as angry at the U.S. government's apparent inability to prevent the spread of Communism.

In 1953 McCarthy became the chair of the Senate's Government Committee on Operations and head of its permanent subcommittee on investigations. Though dwight d. eisenhower, a Republican, became president in 1953, McCarthy used the investigations sub-committee to continue his campaign against Communist subversion in the federal government. McCarthy brought persons before his committee who he claimed were "card-carrying" Communists. He made colorful and clever accusations against these witnesses, who, as a result, often lost their jobs and were labeled as subversive. Evidence that a person had briefly joined a left-wing political group during the 1930s was used by McCarthy to suggest that the person was a Communist or a Communist sympathizer.

McCarthy attacked some of the policies of President Eisenhower, yet the president was reluctant to criticize the popular senator. In April 1954 McCarthy leveled charges against the U.S. Army, claiming the secretary of the army had concealed foreign espionage activities. Thirty-six days of televised hearings ensued, known as the "Army-McCarthy hearings." McCarthy was unable to substantiate any of his allegations. During the course of the hearings, McCarthy's aggressive and intimidating tactics backfired, turning public opinion against him.

After the Democrats regained control of the Senate in the November 1954 elections, McCarthy was replaced as chair of the investigating committee by Senator john l. mcclellan of Arkansas. McClellan, who had been critical of McCarthy's approach, helped lead an effort to censure McCarthy for his methods and for his abuse of other senators. In 1955, the Senate, on a vote of 67 to 22, moved to censure McCarthy.

The censure vote marked the decline of McCarthy's political influence. He died on May 2, 1957 in Bethesda, Maryland.