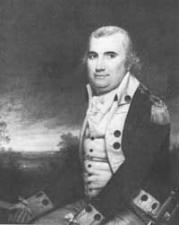 PINCKNEY, CHARLES COTESWORTH. (1746–1825). Brevet brigadier general in the Continental army, statesman, diplomat. South Carolina. Charles Cotesworth Pinckney was born on 14 February 1745 in Charleston, South Carolina. When his father became the agent representing South Carolina's interests in England in 1753, young Charles and his brother, Thomas, went to live London with their parents. After graduating from Oxford, 1764, Pinckney went on to further his training as a barrister at the Middle Temple, and was admitted to the bar in 1769. Pinckney then returned to South Carolina and was immediately elected to the legislature, where he sided with the Patriot cause. Already very wealthy, in 1773 he married Sarah Middleton, the daughter of the extremely rich Henry Middleton, who was prominent in South Carolina politics.

At the outbreak of the Revolution, Pinckney moved rapidly to prepare South Carolina for war. On 22 April 1775 he led a group in seizing British munitions. As a member of the Committee on Intelligence, he worked to enlist support from the backcountry and to plan the defense of Charleston, even while he chaired the committee that drafted the conservative constitution adopted by South Carolina in March 1776. Pinckney became senior captain of the First Regiment of South Carolina troops on 17 June 1775. Promoted almost immediately, he served under William Moultrie in the defense of Fort Sullivan (later renamed Fort Moultrie) on 28 June. Promoted to colonel on 16 September 1776, he took leave from his regiment and served as General George Washington's aide-de-camp at Brandywine and Germantown in the fall of 1777. He then led his regiment in an abortive expedition against Florida in 1778.

Meanwhile, Pinckney continued to advance his political career. He became president of the South Carolina senate in January 1779. He was involved in the military alarms and excursions occasioned by Augustin Prevost's appearance at Charleston on 11 and 12 May 1779. During the Charleston operations that occurred during the following year, Pinckney commanded Fort Moultrie. There was little action at this location, but Pinckney's insistence on the defense of the city led to Benjamin Lincoln's disastrous surrender on 12 May 1780. Pinckney spent the rest of the war on parole in Philadelphia, being included in an official prisoner exchange in February 1782. Rejoining the army, he served until 3 November 1783, on which date he was brevetted as a brigadier general.

In 1782 Pinckney was elected to the South Carolina legislature, and after the war he resumed his law practice and re-entered public life. Although a zealous Anglican and conservative Federalist, he strongly advocated disestablishment and opposed the imposition of any religious test for political office. After taking a prominent part in the Federal Convention (1787), the state convention that ratified the Constitution (1788), and the state constitutional convention of 1790, he set some sort of a record in declining presidential appointments. In 1791 he declined command of the army, leaving Arthur St. Clair to take the post. Both Pinckney and his brother-in-law, Edward Rutledge, turned down President Washington's urgent request that one of them become an associate justice on the Supreme Court. In addition, he twice refused the post of Secretary of War, and in August 1795 he declined to become Secretary of State.

Finally accepting an offer from Washington, he went to Paris in December 1796 as James Monroe's successor in the post of Minister to France. The revolutionary government in power there refused to accept Pinckney's credentials, however, and he subsequently was threatened with arrest. In February 1797 he stormed off to Holland, but in October of that same year he was back in Paris on a special diplomatic mission that resulted in the attempt by three French representatives to extort bribes from Pinckney in order to secure treaty negotiations. Dubbed the "XYZ Affair" (because the French officials were designated by these letters in American diplomatic dispatches), the extortion attempt failed due to Pinckney's integrity. In fact, when "X" made his proposal to Pinckney and pressed for an answer, Pinckney replied, "It is No! No! Not a sixpence!" The affair led many in America to call for war against France, and in preparation for that possibility Pinckney was commissioned as a major general on 19 July 1798. In this capacity he commanded the forces and installations in Virginia and Kentucky, and in the territories to the south. He served until 15 June 1800, after which he ran for the office of vice president as the Federalist nominee. He was that party's (unsuccessful) presidential candidate in 1804 and 1808, as well. He died in Charleston, South Carolina, on 16 August 1825.

Charles Cotesworth Pinckney (1745-1825), American statesman, was a patriot leader and an emissary to France. He was twice the Federalist nominee for president.

Charles Cotesworth Pinckney was born on Feb. 14, 1745, in Charleston, S.C. He was taken to England in 1753 and educated at Westminster School and Oxford. Destined for a legal career, he attended Middle Temple (1764-1769) and was admitted to practice. Despite his English residence, Pinckney regarded America as home, and he returned full of patriotic ardor. He served as attorney general for three South Carolina districts. His marriage to Sally Middleton strengthened his ties with the colony's leading families.

Following the rupture with England, Pinckney was active on his colony's Committee of Intelligence. He became a militia captain and was chairman of the committee that drafted South Carolina's 1776 constitution. In July 1777 he tried to join George Washington's northern command, but no battlefield opportunities came his way, and Pinckney soon returned to South Carolina. When the British finally attacked Charleston, his bad advice led to a disastrous American defeat in May 1780 during which Pinckney himself was captured.

After the war Pinckney veered toward a nationalistic course in his support of enlarged powers for the Continental Congress. He resumed his lucrative law practice, but his personal life was saddened in 1784 by his wife's death, which left him with three young daughters. Chosen as a delegate to the Federal Convention in 1787, Pinckney supported a stronger central government and was an adamant defender of slavery. He signed the Constitution and worked successfully for its ratification in his home state.

Pinckney turned down an offer to become secretary of war in 1794 and later also rejected the secretary of state post. However, in 1796 he was persuaded to become the American minister in Paris, taking on the job of appeasing the French government's anger over Jay's Treaty. Pinckney's mission of reconciliation was early discredited by scheming French diplomats, and he was expelled in 1797. Later, under the new president, John Adams, Pinckney, John Marshall, and Elbridge Gerry were appointed special envoys to heal the Franco-American breach. The ensuing discussions, with demands for bribes and Pinckney's famous "No, no, not a sixpence" in reply, were a diplomatic fiasco exposed to the world in the "XYZ" correspondence.

Steadily, Pinckney's political stance became more Federalist; in 1800 he was advanced as the party's vice-presidential candidate. He was the Federalist candidate for president in 1804 and 1808. Three successive defeats in elections ended his national ambitions. Thereafter, he devoted his energies to South Carolina's affairs, particularly education and philanthropy. He died on Aug. 16, 1825. In his eulogy the "not a sixpence" remark became "Millions for defense, not a cent for tribute"—one of the great slogans of American history.

The only complete biography of Pinckney is Marvin R. Zahniser, Charles Cotesworth Pinckney: Founding Father (1967). Pinckney's papers in the Library of Congress have not been published, but letters to him from Washington and Hamilton can be found in John C. Fitzpatrick, The Writings of George Washington (39 vols., 1931-1944), and Harold C. Syrett and Jacob E. Cooke, Papers of Alexander Hamilton (15 vols., 1961-1969). The edited papers of John Adams, Rufus King, and other contemporaries should also be consulted. □