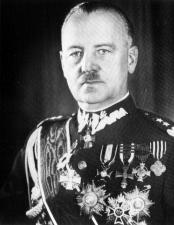 Wladyslaw Sikorski (1881-1943) played a major political and military role in the history of Poland. He founded a secret nationalist organization, guided the modernization of the army, and led a government-in-exile when Poland was invaded by Germany at the start of the Second World War.

Wladyslaw Eugeniusz Sikorski was born in Tuszow Naradowy on May 20, 1881. At the time of his birth, this area (which is now in Poland) was part of the Austro-Hungarian Empire. Sikorski was educated in an Austrian-controlled system and served in the Austrian army. He was soon recognized as a rising military leader. By the time of the First World War, he had achieved the rank of commander of the Polish Legion of the Austrian army. The troops under his command fought against the Russian army of Czar Nicholas.

From an early age, Sikorski had developed a consuming passion for Polish independence. In 1908, he helped to found a secret military organization of nationalists who were dedicated to that cause. It merged with a second nationalist group in 1914 to form the Supreme National Committee (NKN). This group, led by Sikorski, became the nucleus for a future Polish national government. The end of the First World War resulted in a defeat for Austria. Poland was proclaimed to be an independent republic in 1918. The Polish-Soviet war of 1920-21 resulted in the creation of new boundaries. For his distinguished service, Sikorski was named chief of the Polish general staff.

A constitution was written for the new Polish nation in 1921. Sikorski held various cabinet posts in the government, including prime minister (1922-23). As minister of military affairs (1924-25), he was instrumental in guiding the modernization of the Polish army. When Jozef Pilsudski took control of the government in a 1926 coup d'etat, Sikorski initially remained neutral. He joined the opposition in 1928, after being relieved of his command. In his book, A History of Modern Poland, Hans Roos discussed the climate of Poland during the Pilsudski regime, which lasted until 1935. "It was a tragedy for Poland as well as for Pilsudski that the coup d'etat took place at a time when the marshal was physically worn out. The enthusiastic revolutionary, the gifted general, had long ago turned into a sickly, moody, mistrustful statesman, who had certainly retained his proved foresight in foreign and military affairs, but had little time for home or economic questions. Bitter disappointment at the moral bankruptcy had contributed as much to the hardening of his character as disgust at the corruption to which even officials and high-ranking officers had yielded. Only this spiritual loneliness could explain his action in forcing the resignation of a number of generals first and foremost Sikorski who had incurred his displeasure." The animosity between Sikorski and Pilsudski had been growing since World War I. The key issue that divided them was the question of the supreme command and its organization. Pilsudski held contempt for what he determined were Sikorski's attempts to undermine his authority.

Following the death of Pilsudski in 1935, a new constitution formally ended democratic parliamentary rule. Sikorski's political involvement continued. He formed an alliance with Jan Paderewski, the famous pianist, who had long been active in the politics and foreign affairs of his native Poland. Together they encouraged some of the older Catholic politicians to form the Labor Party, based on a union of the Christian Democrats with the National Workers' Party in 1937.

German and Soviet troops invaded Poland in 1939, precipitating the beginning of the Second World War. Poland was divided between these occupying forces and its independent government collapsed. Wladyslaw Raczkiewicz, the former the Speaker of the Senate, fled to France and took over the presidency in exile. He had been a Pilsudski supporter, yet appointed Sikorski as prime minister due to his popularity with the Polish people. Sikorski formed a government-in-exile with representatives of the four large opposition parties who had escaped Poland, or were already living abroad. France, Great Britain and the United States quickly recognized the government. Sikorski was commander-in-chief of an exile army of 84,000 by the spring of 1940.

Hope of imminent liberation collapsed when the Germans were victorious in their 1940 occupation of France. Sikorski stood fast, refusing to become discouraged by the French catastrophe. With help from Britain's prime minister Winston Churchill, Sikorski was able to evacuate at least 17,000 of his soldiers to England and transfer the exiled Polish government to London as well, by June 20, 1940. By August, Sikorski had received permission to station his troops on British soil. Through an understanding with President Franklin Roosevelt, his troops were supplied with American weapons and Sikorski was given permission to recruit American citizens of Polish birth for his army.

In the months prior to Sikorski's death, relations between the Poles and the Soviets were breaking down. Allied forces blamed the Poles for this situation. Only Churchill retained faith in Sikorski, although he warned the general not to provoke the Soviets further. The final blow came on April 13, 1943. Evidence of a Soviet massacre at Katyn Forest was revealed when the bodies of an estimated 10,000 Polish officers who had been missing for a year and a half were found. The Germans claimed that they had proof of the alleged atrocity. The Soviets denied the allegations. Following this discovery, Sikorski asked the International Red Cross to conduct an independent investigation of the matter in order to determine the reliability of the German claims. At this point, he lost the support of Churchill, who told the Soviets that Britain would oppose an investigation.

An even greater challenge faced Sikorski in 1943. Polish troops in the Middle East, primarily in Iraq and Iran, had grown increasingly restless. Many were ill from malaria. They all suffered from the poor conditions. Deserters among the Jewish soldiers mounted as nearly 3,000 of them headed for Palestine. Sikorski's hope to build a strong army in preparation for a "second front" in the Balkans diminished. Sentiment was growing against Sikorski among his troops and his fellow Poles, casting aspersions on his loyalty and his capability at maintaining adequate military command. Sikorski decided that his only course of action was an extended visit to the force in the Middle East. On May 25, he and his entourage left England, travelling through the British colony of Gibraltar, on their way to Cairo. After concluding a satisfying trip, Sikorski boarded a plane for the return flight to England on July 3, 1943. His plane crashed within seconds of its takeoff from Gibraltar, killing all of the passengers.

Many theories arose, particularly among suspicious Poles, that the plane had been sabotaged. They suspected Germans, Soviets, even Winston Churchill himself. A witness concluded in later years that it was likely an act of mechanical failure, since there was never any concrete proof of conspiracy. Upon his burial at the Polish Airman's cemetery in England, Churchill proclaimed that, "Soldiers must die. But by their death they nourish the nation which gave them birth. Sikorski is dead, but it is in this sense that you must think of your dead prime minister and commander-in-chief—his efforts and your sacrifices shall not be in vain. Be worthy of his example."