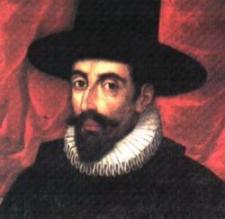 Francisco de Toledo (1515-1584), the fifth Spanish viceroy of Peru, established his reputation in that office as one of the most talented and energetic administrators of the Spanish Empire in America.

Francisco de Toledo, born in Oropesa in New Castile, was a scion of an illustrious and noble family, Alvarez de Toledo, which was related both to the dukes of Alba and to the royal family of Spain. Toledo spent many years in military service to the Crown in its far-flung possessions in Europe and in North Africa. He became a favorite aide to the emperor-king Charles V and to the latter's son Philip II when he ascended the Spanish throne in 1556. Toledo acquired great knowledge of imperial affairs, and his keen judgment and tireless capacity for work earned him appointment as viceroy of Peru.

When Toledo arrived in Peru in 1569, the area so named consisted of all of western South America, from Panama to Chile, east of the Andes to the jungles, and southeast across modern Bolivia into present-day Argentina. Toledo arrived in the capital city, Lima, with great pomp, a large retinue, a high salary, and broad authority from the Crown, extending over all aspects of the life of the colony.

The viceroy's principal goals were to organize the numerous Indian population for their own protection against the demands of the Spanish settlers and also for their more efficient availability as laborers and tribute payers; to consolidate, develop, and establish Spanish institutions and settlements; and to put down the still rebellious portion of the Indian population.

During his time in Lima, Toledo devoted himself to vitalizing and regularizing the political, civil, and ecclesiastical institutions of the kingdom. He appointed new municipal officials to towns that had long lacked them; he ruled on questions of boundaries between judicial districts; and he oversaw the establishment of the Inquisition, which was introduced into Peru for the stated purposes of extending knowledge of the true God and of protecting Catholic beliefs from false doctrines.

Toledo's energy and his desire for firsthand knowledge of his subjects led him to depart from Lima at the end of 1570 on the most extended visita, or tour of inspection, ever undertaken within the Spanish Empire by a ranking official. The inspection tour of Toledo lasted 5 years and took him, it is estimated, 5, 000 miles throughout the land.

One of the central matters with which the viceroy dealt on his inspection trip, and, indeed, throughout his time in Peru, was that of the production of precious metals, particularly silver, in whose output Peru led the world. To increase mineral production, the viceroy introduced a new method of smelting silver ore, an amalgamation process which involved the use of mercury. Mercury was produced in Peru at the mine of Huancavelica, and Toledo's careful attention to the improvement of the laws and practices governing the mercury mine and all the mines of Peru led to a substantial increase in mineral output.

Another significant but not always successful aspect of Toledo's rule centered on his policies toward the Indian population. An act for which he was widely criticized involved the Inca ruler Túpac Amaru. The Inca, who lived with his reduced following in a wilderness area north of the former Inca capital of Cuzco, maintained a rebellious posture against the Spaniards, who had taken the lands of his forefathers. Indian raids on Spanish highway traffic and attacks on scattered Spanish colonists, culminating in the murder of several of Toledo's emissaries to the Indians, led to the seizure of the Inca by Toledo. Despite pleas for clemency from some of Toledo's closest advisers and their claim that the Inca chief had been sentenced on the basis of much false testimony, Toledo, in 1571, ordered the execution of Túpac Amaru and personally witnessed the implementation of his decree.

In another unsuccessful aspect of his Indian policy, Toledo attempted in 1574 to pacify the Chiriguano Indians, a tribe that occupied an area in present-day Bolivia. Toledo himself went into the field against the Indians at the head of a few hundred troops but was unable to subdue them.

More successful was Toledo's constant effort to improve the situation of the pacified Indians and to bring reason and right into their relationships with their Spanish masters, to whom they were obliged to pay tribute and for whom they were made to labor in the mines, in public works, and in personal service. Toledo in effect set up a bipartite government in Peru for the Indians in which they had a separate political structure under their own chiefs (curacas or caciques) but a political system which was ultimately under the control of Spanish officials, the corregidores de indios.

One of the principal devices which Toledo employed for maximizing the amount of labor and tribute which the Spaniards could extract from the native population—while seeking to improve the living conditions of the Indians and to protect them against oppression—was to found new towns for them, called reducciones, into which the Indians were moved from their scattered dwelling places and where they had the benefit of a more regularized and, presumably, more healthful life.

Through the corregidores de indios, Toledo established to a considerable degree the rights of the Indian subjects of the Crown against Spanish encroachment on their persons, lands, and other property. He had an extensive census taken of the Indians in order to determine the numbers available for labor and to pay tribute, and he carefully fixed the amount and the type of tribute the Indians were compelled to pay and the conditions of draft labor, or mita, which they had to meet. But Toledo also punished mistreatment of the Indians by Spanish laymen.

In his relationship with the Church, which was powerful and closely integrated with the civil government, Toledo worked hard to improve the condition of both the secular and regular clergy, who had been in a state of decline when the viceroy came to Peru. The viceroy insisted, with much success, on the correct fulfillment of clerical duties. He expanded religious education, and he punished immoral behavior by clerics.

The improvement and extension of education in the viceroyalty were other major concerns of the dynamic To-ledo. The university, which had been founded in 1551, was in fact a mere secondary school run by the Dominican order. Toledo removed the school from the control of that order, gave it new endowments, reorganized its courses, and named new faculty members. These actions by the viceroy laid the basis for the fame that the University of San Marcos has achieved over the centuries since the 1570s.

Toledo was active in many other areas. For example, he established the protomedicato, a royal medical board responsible for licensing physicians and for aspects of public health. He founded many towns in Peru, Bolivia, and Argentina, and he was always active in the construction of diverse public works, ordering and seeing to completion the building of bridges, waterworks, and roads and the repair and construction of other edifices.

Toledo's career ended in 1581, when he was recalled to Spain. Philip II, as was not unusual in the days of absolute monarchy, showed more dissatisfaction than pleasure at the achievements of Toledo, especially because of the execution of Túpac Amaru, and the last years of the viceroy were spent in royal disfavor. However, in the light of history, Toledo's character as an indefatigable, loyal, and generally high-minded servant of the Crown and his multitude of accomplishments in Peru give him a lasting place as a model administrator of Spain's American empire and, indeed, within imperial history as a whole.

Arthur F. Zimmerman, Francisco de Toledo, Fifth Viceroy of Peru, 1569-1581 (1938; new ed. 1968), is the only biography in English; although more a compilation of facts than a scholarly analysis, the book outlines Toledo's principal achievements in Peru. The study by Phillip A. Means, Fall of the Inca Empire and the Spanish Rule in Peru, 1530-1780 (1932), also contains information about Peru under Toledo and gives a much less favorable image of the viceroy than does Zimmerman's monograph. □

at Valentia, he studied theology at Salamanca. He was ordained in 1558 and entered the Society of Jesus the same year. Called to Rome by Jesuit General Francis Borgia in 1559, he taught philosophy at the Roman College until 1563, and then theology. In 1569, Pius V appointed him preacher at the papal court, an office he held for 24 years. During his years at the Roman College, De Toledo wrote many works on philosophy, Scripture, and theology, most significant among which was his In summam theologiae S. Thomae Aquinatis enarratio (4 v. Rome 1869–70). An independent thinker, he opposed many of Cajetan's interpretations of Thomas Aquinas and was the first at the Roman College to teach predestination in view of foreseen merits. Highly esteemed by successive popes for his learning and diplomatic resourcefulness, De Toledo was sent on many papal missions, most important of which was to Louvain (1580) to promulgate the bull of Gregory XIII, Provisionis nostrae, concerning the errors of Baius (see baius and baianism). Through De Toledo, Henry IV made his reconciliation with the Church, and at Henry's request Clement VIII made him a cardinal (Sept. 17, 1593). In his last years he played an important role in the revision of the Vulgate.

Pueblo Revolt 1680 , PUEBLO REVOLT. After the Spanish established a colony in the Rio Grande valley in 1598, they seized Indian land and crops and forced Indians to labor… Jose De Anchieta , José de Anchieta José de Anchieta José de Anchieta (1534-1597) was an influential Jesuit missionary in Brazil who was especially concerned with the w… Mestizo , Mestizo Mestizo, a term used in the colonial era to refer to a person of evenly mixed Indian and Hispanic ancestry. The first generation of mestizos… Shawnee Prophet , Tenskwatawa, the Shawnee Prophet (1775?-1836) Sources Religious mystic The Old Northwest. By the end of the eighteenth century the Old Northwest, def… Wilma Mankiller , Native American political leader, social activist Wilma Mankiller, a member of the Cherokee Nation (Native American tribal government located in Okla… Potosi , Potosí Potosí was the most famous and most productive source of silver in the Spanish empire in the sixteenth and seventeenth centuries. Settlement o…