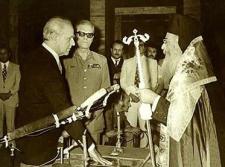 Constantine Karamanlis ranks among the most prominent political figures of 20th-century Greece. He was born on March 8, 1907, in the small town of Proti, near Serres, in Eastern Macedonia. His father, a teacher and later a tobacco grower, was known for his patriotic feelings and involvement in the struggle over Macedonia, at that time under Turkish rule. Karamanlis' political philosophy was shaped by the impact of the Macedonian struggle, the Balkan Wars, and World War I on the peoples of northern Greece; the sharply divisive Greek politics during World War I between the Royalists and the Venizelists, usually referred to as the "great schism"; and the instability of Greek political and social life in the interwar years. This philosophy can be described as a commitment to an orderly democratic process made possible through constructive reforms aimed at improving social and economic conditions and ensuring political stability and continuity. He gradually emerged as a conservative Western-type reformer with a definite vision of the needs and aspirations of modern Greece. He served Greece at crucial historical periods and ultimately made it a member of the European Community.

Karamanlis received his primary education in his home town of Proti and his high school education in Serres and Athens. After finishing law school at the University of Athens, he did his military service and in 1930 embarked on a successful law career in Serres. There he also began his political career when in 1935, at the age of 28, was elected to Parliament. The Metaxas dictatorship (with which he refused to cooperate), World War II, the German occupation of Greece, and the bitter civil war that followed slowed or modified his political plans. For most of this period he remained a reflective observer.

Karamanlis was reelected to Parliament in 1946 by the Populist Party, and from this time on he became increasingly involved in committees dealing with both domestic and foreign matters. In 1946 he went to the United States as a member of a mission that secured badly needed American aid for the postwar reconstruction of Greece. Later that year he was appointed minister of labor, a position which was later expanded to include agriculture, and in 1948 he became minister of transportation.

After the end of the civil war Karamanlis became indefatigably involved in Greek politics, especially after joining the Greek Rally directed by General Papagos. When the Greek Rally asserted its position in the November 1952 elections, Karamanlis was appointed minister of public works, a position he held until 1955 and after 1954 simultaneously with that of the ministry of transportation. This was a crucial appointment, enabling him to set the foundation of the economic reconstruction of Greece which many foreign observers described as the Greek miracle. In essence, the reconstruction included the building of better roads and an efficient communications system, irrigation, hydroelectric dams, electrification, the development of new industry, decentralization of industry, and, finally, the rapid growth of tourism and related services and industries. The experiences of this decade (1945-1955) sharpened Karamanlis' political acumen, contributed to his enhanced visibility at home and abroad, and earned him a reputation as an efficient, and clearly pro-Western, political figure. Thus, when General Papagos died in October 1955, King Paul asked Karamanlis to form a new government.

For nearly a decade Karamanlis dominated Greek politics as prime minister and gained in popularity as evidenced by the results of the 1958 and 1961 elections. On January 4, 1956, he organized a new party, the National Radical Union (ERE), which reflected his own ideological position. He then informed the Greek people that on the basis of his experiences and research, he believed that Greece could transform itself and that the Greek people could change their fate. In his opening speech in Parliament he had already outlined his main objectives in domestic and foreign matters: to reform public life and modernize the national economy and to deal with the thorny Cyprus problem caused by the Greek Cypriots' desire for independence from British colonial rule and enosis (union) with Greece.

It was an enormous task with impressive results in some areas. At home there was a stabilization of the currency, development of new industry, and increased agricultural and industrial production. The living standards of Greek farmers and workers doubled, and the per capita income rose from $305 in 1955 to $565 in 1963, an increase of 85.2 percent in eight years. Generally this was a period of political stability and economic growth, even though it was marred by allegations of fraud in the 1961 elections, the assassination of Gregory Lambrakis, and conflict with the royal family, especially Queen Frederika. These incidents affected his plans for constitutional reforms through which he had hoped the executive would acquire more power.

The Cyprus problem haunted him, contributing to the deterioration of relations between Greece and Turkey and weakening the NATO alliance to which both Greece and Turkey belonged. Still, Karamanlis used his prestige to support the Cypriot struggle for independent statehood with Great Britain, Greece, and Turkey as guarantor powers through the signing of the Zurich Agreement in 1959. He believed that the idea of the Union of Cyprus with Greece should at best be postponed. Thus Cyprus remained an irritant for the rest of his political career.

His term as prime minister was interrupted in 1963 when disagreements with young King Constantine and pressures from the opposition party of the veteran politician George Papandreou compelled him to resign and leave the country to avoid a new schism or a civil war. He moved to Paris where he lived for the next 11 years studying and observing Greek politics. He was saddened but not surprised by the events that led to the overthrow of the king and establishment of the military dictatorship in Athens (1967-1974). He criticized the junta but did not participate in any overt attempts to overthrow it. This was in keeping with his style of not participating in politics if there was not a legitimate political mechanism through which to act.

After the fall of the Athens military regime, precipitated by the Cyprus crisis of July 1974, an invited Karamanlis returned to Greece as a political messiah and helped the country make a bloodless transition from dictatorship to democracy highlighted by the Constitutional Charter of 1975 and strict guarantees for democratic institutions. Karamanlis had by now reached full political maturity and great prestige. Under the banner of his party, renamed or reformed as the New Democracy, Karamanlis again dominated the political scene, acting with tolerance and confidence. The deposed military dictators were sent to jail, the Communist Party of Greece was legally recognized, and the question of the nature of the regime which had pestered Greek politics for over half a century was settled by a plebiscite at the expense of the royal house.

Even though the transition from dictatorship to democracy was a relatively smooth process, the last years of Karamanlis' political life were tense. The matter of education and other old social issues were articulated in a new context by critics fond of identifying Karamanlis with the "Old Order" dependent on the NATO Alliance, especially the United States. Despite inflation the economy improved and per capita income almost doubled from 1974 to 1979. And, despite his pro-Westernism, one of the distinctive characteristics of his foreign policy during this period was the Greek rapprochement with the Balkan countries, a new phenomenon in postwar Greek foreign policy.

Karamanlis was understandably disappointed with the turn of events over the Cyprus problem in July 1974 which led to the coup against President Makarios, the Turkish invasion, and the de facto partition of the island—all seemingly with U.S. consent. Though these events contributed directly to the fall of the military regime in Athens and to Karamanlis' return to active Greek politics, he chose not to go to war with Turkey over the issue. This, too, was in keeping with his style of assessing realities correctly and his faith in the negotiating process.

Although he disapproved of U.S. policy toward Greece during this period, he nevertheless remained firmly within the Western camp, seeking at the same time to strengthen Greece's self-reliance. This self-reliance, he felt, could be pursued best within the context of a united Europe. From the beginning of his career as prime minister, Karamanlis envisaged Greece as part of Europe and, as a believer in the "European Idea," he worked hard to have Greece included among the European communities. Thanks to his efforts, Greece became the tenth member of the European Economic Community on January 1, 1981.

Karamanlis pursued the same ideals and practices after he became president of Greece in March 1980, a post he held until his resignation on March 10, 1985, and for another five years beginning in 1990. Amid the constantly shifting tides of Greek politics, he remained a hero in retirement, enjoying a respect and recognition not frequently accorded Greek politicians. Europeans expressed their admiration and respect for him with such awards as the Charlemagne and Schumann prizes for his effort on behalf of the European Community. He was also honored with the golden medal of the European Parliament and with the highest medal of the Sorbonne and the Universities of Paris.

In 1997, ailing and in his 90th year, he saw his nephew and namesake, Costas Karamanlis, elected as leader of the bickering New Democracy party, with an eye toward recapturing power from the Socialists in a turn-of-the-century election.

Because of Karamanlis' centrality in modern Greek politics, almost every book of history or politics that deals with post-war Greece includes discussion or appreciable references to his work as a statesman. A good introduction is Richard Clogg, A Short History of Modern Greece (1974), and the much more detailed description of the Greek political system during the 1950s and 1960s by Keith Legg, Politics in Modern Greece (1969). The most accessible biography of Karamanlis is the sympathetic account by C. M. Woodhouse, Karamanlis: The Restorer of Greek Democracy (1982) and the same author's The Rise and Fall of the Greek Colonels (1985), which makes special references to Karamanlis' stay in Paris during the military dictatorship. □