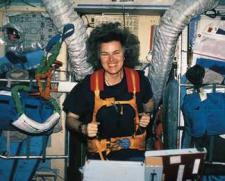 Astronaut Shannon Lucid (born 1943) set the U.S.record for space flight endurance by staying aboard the Mir station for 188 days in 1996. This also set the record for the longest time a woman remained in space.

Lucid made aeronautic history after spending 188 days and 75.2 million miles in space, longer than any other American astronaut or any woman in the world. A Russian cosmonaut set the world's record for staying in space-439 days-but Lucid broke the female record, previously set by Russian Elena Kondakova, who was in orbit for just under 170 days. Lucid's stay on Mir was covered heavily in the American media, which played up her time away from her husband and three grown children, as well as her craving for the candy M&Ms. However, articles also pointed out that she was, at the time, the most experienced NASA member, holding a doctorate in biochemistry and having gone on four previous space flights. Her longest stint in space came at a high point in a life and career that, according to People's Richard Jerome, "reads like a collective work of Pearl S. Buck, Sinclair Lewis and Arthur C. Clarke."

Lucid was born in China in 1943. Her parents, J. Oscar and Mary Wells, were American missionaries in China. Lucid spent her early childhood in a Japanese internment camp before the family was freed in a prisoner exchange and eventually settled near Oklahoma City. As a young girl she discovered a book on Robert Goddard, the father of rocketry, and it solidified her future. Lucid earned her pilot's license following high school. She then received her B.S. in chemistry from the University of Oklahoma, followed by a master's and doctoral degree in biochemistry, also from Oklahoma. Not even the birth of her second child, the day before an important exam, could stop Lucid from completing her requirements. She has three children-Kawai Dawn, Shandra Michelle, and Michael Kermit-with her husband, Michael F. Lucid.

In 1973, "when NASA finally began recruiting women for the astronaut corps, Lucid scrambled to submit an application," wrote Sharon Begley in Newsweek. "NASA took her, one of the first American-born six women … ever selected for astronaut training." She was selected in January of 1978 and became an astronaut in August of the following year. Begley added that while undertaking the rigorous physical and psychological tests, Lucid and the other women recruits "proved that the Right Stuff does not reside in the Y chromosome."

While Lucid was not the first American woman astronaut in space-that distinction belongs to her fellow recruit, Sally Ride-she became America's most experienced astronaut, male or female. Lucid undertook her maiden voyage on the shuttle Discovery in 1985 and also logged three flights prior to Mir, in 1989, 1991, and 1993, in addition to several orbital trips.

When Lucid was chosen for the Mir mission, she joined two male cosmonauts who became known in the American press as "the two Yuris"-Yuri Onufrienko and Yuri Usachev. She blasted off from the Kennedy Space Center in Florida on March 22, 1996. Living in the equipment-packed, 100-foot shuttle was an experience Lucid compared to "living in a camper in the back of your pickup with your kids … when it's raining and no one can get out." A biochemist, Lucid studied the effects of the space environment on living tissue. She also received an object lesson in international diplomacy when a Russian general remarked that with Lucid on board the shuttle should look tidier because "women love to clean." Lucid responded by saying that the three crew members worked as a team to maintain order on Mir. Similarly, when the two Yuris were perceived by the press to have insulted Lucid by placing tape over controls they hadn't wished her to touch, the astronaut replied that she would have done the same if she were the captain of the ship.

While Lucid had signed on for the long mission aboard Mir, the stint wasn't intentionally designed to be a record setter. Seven weeks were added to her flight time, first because of a mechanical glitch in the pickup shuttle, then because of Hurricane Fran's effect on the next shuttle launch. The shuttle Atlantis was originally scheduled to retrieve her on July 31, but it was pushed back to September. Lucid occupied her time by reading novels and histories of the American West sent up on supply ships, and by working on her experiments (including how protein crystals grow and how quail embryos develop in zero gravity).

Life on Mir was an adjustment. Lucid took only sponge baths the whole six months on board, and could only wash her hair every three days using a special no-rinse shampoo that NASA devised. She did manage to have privacy, because she had a separate module and toilet from the men. Lucid combated loneliness by excercising, sending frequent e-mail messages to her husband and children, and participating in press conferences and teleconferences. Though she eagerly awaited the next shipment of potato chips and M&Ms dropped off by the Russian robot supply ship Progress, she noted that the fruit and vegatable deliveries caused a bad odor in the ship. But she did enjoy the fresh tomatoes and onions, and their Sunday night Jell-O ritual was also a treat.

Finally, in late September 1996, Lucid left Mir for her pickup shuttle. After her craft touched down in Florida on September 26, Lucid was attended by doctors and assistants who meant to carry her to a medical transporter. But Lucid surprised the experts by standing and walking "wobbly and woozy," as she described it-to her vehicle. When Lucid reached the transporter, a Newsweek writer reported, "physicians began exhaustive tests to determine how weightlessness had affected her heart, muscles, bones, blood, urine, saliva, balance, strength, aerobic capacity-in short, anything that can be measured, observed, titrated, counted or otherwise quantified." In this way Lucid became "the most important body of data-literally-that NASA ever got its stethoscopes on." She would spend three years being monitored.

"A day after returning to Earth," Begley writes, "Lucid left [Cape] Canaveral aboard NASA 1 and landed at Ellington Field outside Houston. President Clinton met the entire Atlantis crew, where the commander in chief praised Lucid's achievement as 'a monument to the human spirit.' Lucid smiled on the podium behind him, a big Stars and Stripes fluttering in the stiff breeze behind her. To no one's surprise this time, either, she was still standing tall." Lucid was awarded a Space Medal of Honor in December 1996, and in February of 1997, received a Free Spirit Award from the Freedom Forum.