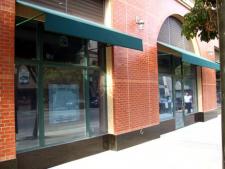 Maud Wood Park (1871-1955) was a social activist hoping to educate new voters and becoming the first president of the League of Women Voters.

Maud Wood Park became first president of the League of Women Voters, a nonpartisan organization to educate new voters following the passage of woman's suffrage in 1920. Maud Wood grew up in Boston and earned money by teaching in Chelsea High School in order to attend Radcliffe College. In 1898 she graduated summa cum laude from Radcliffe, where she was one of only two students in a class of seventy-two to favor the vote for women. While still a student, she married Charles Edward Park, a Boston architect, in 1897. The couple lived near the Boston settlement Denison House, introducing Maud Wood Park to social-reform work. Charles Park died in 1904.

For fifteen years Maud Wood Park was active in suffrage and civic work in Boston. She became chair of the Massachusetts Woman Suffrage Association in 1900 and executive secretary of the Boston Equal Suffrage Association for Good Government, which was devoted to combining work for suffrage with activities for civic betterment. A charismatic speaker, Park traveled widely to enlist college women in the cause of suffrage. In 1916 her friend Carrie Chapman Catt, president of the National American Woman's Suffrage Association (NAWSA), persuaded Park to join the NAWSA's Congressional Committee and to go to Washington to lobby directly for the federal suffrage amendment. Thus Park led the "front-door lobby" to win suffrage.

Park agreed to serve as first president of the League of Women Voters (LWV), the organization that succeeded the NAWSA. She said that the league's purpose should be to "promote reforms in which women will naturally take an interest in a greater degree than men—protection for working women, children, public health questions, and the care of dependent and delinquent classes." Under Park's leadership the LWV adopted a thirty-eight-point program of legislative measures. Though women's organizations divided in the 1920s, Park helped form the Women's Joint Congressional Committee (WJCC) in 1920, with representatives from nine other women's organizations, and then became its head. The WJCC succeeded in winning two important pieces of legislation: the Sheppard-Towner Maternity and Infancy Protection Act of 1921 and the 1922 Cable Act, which granted independent citizenship to married women. The league also served to pressure the Women's Bureau to end child labor and promote social legislation on behalf of women. Because of serious illness, Park resigned from the presidency of the league in 1924, but she continued for the rest of her life to lecture and work on behalf of women.

Central Park , The first major public example of landscape architecture, Manhattan's Central Park remains the greatest illustration of the American park, a traditio… United States. National Park Service , The National Park Service, an agency in the U.S. Department of the Interior , was established by the National Park Service Act of 1916 making it the… Robert E. Park , Park, Robert E. Park, Robert E. 1864-1944 The American sociologist Robert Ezra Park was a leading figure in the “Chicago school” of sociology. He was… Rosa Louise Parks , Parks, Rosa 1913— Civil rights activist According to the old saying, “some people are born to greatness, and some have greatness thrust upon them.” G… Deer Park , Deer Park park / pärk/ • n. 1. a large public green area in a town, used for recreation: a walk around the park. ∎ a large area of land kept in its n… Mungo Park , Park, Mungo (1771–1806). A child of the Scottish Enlightenment, Park's Edinburgh medical and botanical training and Sumatran experience led Banks to…