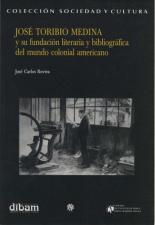 Jose Toribio Medina (1852–1930) set out at the age of 22 to catalog the manuscripts and histories of his native Chile. Five years before his death he donated to the Chilean National Library a total of 60,000 original forms, 1,668 manuscripts, and 8,659 transcribed documents. His comprehensive works on the Inquisition in Chile, Peru, and the Philippines would represent only a small part of his remarkable legacy.

Jose Toribio Medina was born on October 21, 1852, in Santiago, Chile. His father was a judge, Jose of the Medina Pillar, and his mother, Mariana Zavala, was of Basque ancestry. When he was three years old, Medina's father was named judge of Talca. There Medina attended a private school called Santiago. In 1860 the family was transferred to Valparaiso, but just two years later Medina's father became a quadriplegic when he was only 33 years old. Medina's father was sent to live in Santiago, and his mother was given a government pension on which to live and support the family. In 1865 Medina entered the National Institute and graduated in 1869, awarded with prizes in Latin and literature. As a law student at the University of Chile, Medina nonetheless continued with his own studies of Natural History and Entomology. In 1853, at the age of 21, he was awarded his law degree. That same year he published his first piece of literary criticism of the novel, Maria, by Colombian Jorge Isaac. It appeared in Sud America on August 25, 1873.

Chile in the Nineteenth Century

In the middle of the nineteenth century, Chile was "organized political[ly] and institutionally," according to a PCLA article by Javier Piñeiro Fernandez, a professor of History of the Media in the Faculty of Sciences of Communication at University Diego Vestibules, Santiago. Fernandez went on to say that, "The Constitution of 1833 governed the destinies of the country, and during thirty years (1831–1861) preservative governments followed one another. The fever of gold of California and Australia stimulated the economy of the country, through the export of wheat and maize, and of the consolidation of the port of Valparaiso like the main one of the Pacific," which was a key location until the building of the Panama Canal. This time for Chile was one not only of some prosperity, but of a cultural blossoming in education and in literature.

Medina received an appointment as secretary of the Chilean legation to Lima, Peru, the same year he graduated law school. While in Lima he discovered the remarkable National Library under the guidance of its director, Francisco de Paula Rodriguez Vigil. Medina was not partial to diplomatic work, though it enabled him to travel and to saturate himself in the work he came to love as an investigator into the history of Chile through its volumes of documents. By 1875 he published his first volume of documentary history, a 17th century manuscript, Memories of the Kingdom of Chile and Don Francisco Meneses, written by Friar Juan de Jesus Maria. His travel became increasingly frequent, both to Europe and to the United States, digging through archives and searching to fill his bibliographies. In 1877 he published a 1,300-page volume titled History of the Colonial Literature of Chile.

Neither War nor Work Interfered

When war broke out between Chile and the Peru-Bolivian confederation in 1879, Medina went into military service. He joined the Army and was sent to the city of Iquique, where he served as advisor to the Chilean Army. While he was in Iquique, he was named judge of Letters and was able to continue his investigations.

When the conflict ended in 1883, Medina returned to diplomatic service and joined the Chilean legation as secretary once again, this time going to Spain. In Madrid and Seville, he was able to examine the archives of Indians and those native to his home country, as well as private libraries that included many Chilean documents. He scouted through the National Library, the Library of the Real Palace, the National Historical File, and the libraries of the ministries of the Navy and War, in a collection known as the Hydrographic file, the real Academies of Language and History, and in convents and other military collections. His government gave him the money he needed to buy these works or have them copied. His location in Europe also gave him easier access to the libraries of Vienna, Berlin, Brussels, and London. While in Spain he and his assistants were able to transcribe more than 15,000 document pages and collect books, pamphlets, and maps. His work during this time also enabled him to publish works on the aboriginal tribes of Chile.

Medina returned to Chile in 1885. He married Mercedes Ibáñez Rondizzoni, the daughter of the diplomat Adolph Ibáñez, who was famous for his work defending Chilean interests in the Patagonia. Rondizzoni not only became Medina's wife, but also his secretary. With her help Medina established his own press, Ercilla, in 1888. The first publication his press created was the American Library of 1888, which was a catalog of 2,928 titles on Latin America and the Philippines. Medina would eventually list approximately 565 titles of books printed in Manila from 1593 to 1810 in his book, La Imprenta en Manila desde sus origines hasta 1810, in 1896. Experts considered this the most extensive bibliography of printed matter in the Philippines that had ever been compiled. The year before he established his own press, Medina also began publication of a series regarding the detailed histories of the Inquisition as it was carried out in the Spanish colonies that included Chile, Mexico, and Peru. That project was not completed until 1905.

In 1891 Chile entered a civil war. Medina was the mayor of Santiago at the time and supported the sitting president, Jose Manuel Balmaceda. Balmaceda was defeated, however, and he committed suicide. As a consequence, Medina himself was accused of using his press for government propaganda. He was forced into exile and first fled to Buenos Aires, Argentina, in 1892. The director of the Museum of the Silver had extended an invitation to him, and he was thus able to continue his work there. By August of that year he published the History y bibliografia de la imprenta en el antiguo vireinato del Rio de la Plata (History and Bibliography of printed matter in the Old Virreinato of the River of the Silver). Medina was able to print his work right at the Museum of the Silver. Before returning to Chile in 1895 he traveled to Spain again in the interest of research.

Between 1895 and 1902, Medina and his wife began a new press, the Elzeviriana, and also wrote and published. (He did the writing, and she served as editor.) They published almost 73 books and pamphlets, with seven of them printed as re-issues. One of the most monumental works published in 1895 was Relación, which was an account of the 1541–42 Amazon expedition of Francisco de Orellana written by Friar Gaspar de Carvajal, the chaplain who accompanied him. Orellana, originally from Trujillo, Spain, became governor of Guayaquil, Ecuador, in 1540. Parts of the transcript had originally appeared in Oviedo's Historia general de las Indias, written in 1542 at the journey's conclusion but not published until 1855. According to an article in the Athena Review, "Oveido's account is especially valuable because he combined Carvajal's narrative with interviews of Orellana and some of his men." When Medina edited the full version in 1895, it was the first complete publication of the work.

In 1897 Medina published the Chilean Hispanic Library. In 1898 he began publishing what would turn into a seven-volume series, Biblioteca Hispano-americana, 1493–1810 (Bibliography of Hispanic America, 1493-1810). Publication would take nine years, and the work was completed in 1907. Also in 1897, Medina began a new aspect of his career when he was chosen as an academic member of the Faculty of Philosophy, Humanities, and Arts at the University of Chile. In 1899 he became the first chair of American and Chilean Documentary History.

Before the end of 1902 Medina and his wife were traveling again, to Europe and to America, sent as a commissioner of the Ministry of Public Instruction to study the file layout of libraries. When he returned to Chile he resumed publishing. Between 1904 and 1912 he published 59 books and pamphlets and 14 articles, in addition to publishing some reissued editions. One of the books published during that time was a bibliography of the Mexican Press between 1539 and 1821. When Medina left again for Europe in 1912, as an official commissioner of the government, he was in pursuit of more information on the Araucana, a tribe of peoples native to Chile.

Medina sold his press in 1919 but continued to work. Between 1920 and 1930 he published works that included History of the Real University of San Felipe of Santiago and Colonial Hispanic Cartography of Chile. Medina died in December 1930 in Chile.

Many of Medina's works are located in the National Library of Chile. In 1925, he presented his personal collection of 2 individual catalogs; 60,000 original forms; 1,668 manuscripts; and 8,659 transcribed documents. A special room named in his honor is home to the collection.

The Jose Toribio Medina Award, created in Medina's honor, was established by the Seminar on the Acquisition of Latin American Library Materials (SALALM). According to the SALALM website, the award is presented to SALALM members for work that "adds to the body of knowledge about or provides access to Latin American library materials, Latin American libraries and librarianship, or the Latin American book trade." Medina was honored by Chile with a stamp in his honor in 1953.

Catalog , catalog, descriptive list, on cards or in a book, of the contents of a library. Assurbanipal's library at Nineveh was cataloged on shelves of slate.… Russia. Russian State Library , The Russian State Library is the largest library in Russia; the second largest library in the world after the Library of Congress, with holdings of m… Pierpont Morgan Library , Pierpont Morgan Library, originally the private library of J. Pierpont Morgan, in 1924 made a public institution by his son J. P. Morgan as a memoria… Folger Shakespeare Library , FOLGER SHAKESPEARE LIBRARY. The Folger Shakespeare Library, opened in 1932, houses the world's largest collection of Shakespearean manuscripts. Henry… Corporate Taxes , 1 Overview A. Overview of the Publishing Industry in the Chinese Mainland B. Overview of the Publishing Industries of Taiwan, Hong Kong, and Macau C.… British Library , British Library, national library of Great Britain, located in London; one of the world's great libraries. Long a part of the British Museum, the lib…